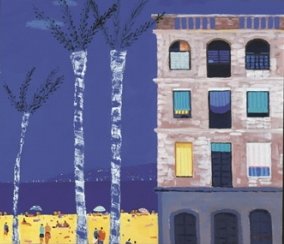 View All Art Works By Alan Furneaux
Greetings contemporary art fans, and welcome to the contemporary art world of (relatively) new (to us, anyway) and terribly exciting landscape artist, Alan Furneaux. A thoroughly modern artist who’s so good at what he does, a percentage of his unique designs have lent themselves to greetings card covers recently. So who is Alan Furneaux, who henceforth will purely be referred to as, ‘Furneaux?’ Well, according to his Facebook profile, exciting (our word, not his)contemporary artist, Alan Furneaux likes to create ‘simple naive style paintings that hold your interest’, and to be perfectly honest we couldn’t have put it more succinct ourselves. A popular artist whose latest works have been inspired by the shapes, colours and general visual ambience of Morocco, again courtesy of his Facebook page (other social networks are available from all leading retailers). Altea seems to have been his main influence in terms of sights, sounds and smells whilst in Morocco we note as we dig a little deeper.

Furneaux has also completed a wedding portrait – of the happy couple in a very simplistic style – and a sort of Last Supper-ish piece too, complete with angels in high heels and various farm animals at the foot of the trestle table; so not at all blasphemous. What’s more he’s also done a semi-nude (top half only) and a handful of still life compositions too it appears on closer inspection, including a cat sat in front of a tree and a (slightly predictable) vase of flowers on a table. Admittedly a tad 6th form, yet being by the brush of Furneaux, stunningly captured in every illustrative aspect and ratio. 95%. Distinction. Etc. However Furneaux is perhaps best known for his sublime visual captures of his native Cornwall and its ever diverse landscaped character (more of which in a jiffy).

The son of Mr Alan Furneaux senior, a CSM in the Grenadier Guards, Furneaux Jnr was born in 1953 London, yet found himself on the move quite a lot on account of his father’s occupation. But this never proved problematic to a young Furneaux, as like most kids, he loved exploring new places. During his schooling, Furneaux enjoyed sport, music and art, and on leaving secondary education attended the Reigate School of Art. However this was short lived, as his first love wasn’t art at all, it was music. And this happened to be the career he chose to follow thereafter, playing rhythm and blues until his late 30s. Yet thanks to a close relationship with his grandfather (the artist, George Hann) he began to paint seriously in the late 1980s. In fact, so taken with his grandfather’s passion for art, Furneaux moved to Brighton in 1985 so as to be nearer to his grandfather/art teacher.

Hann was an established painter who had originated compositions all his life, and provided a constant source of creative inspiration to Furneaux, reminding his grandson (and fledgling artist in the making himself) ‘never to be afraid of the canvas’. It was until 1992 that Furneaux took the plunge and opted to become a professional artist as such, and only then in the direct aftermath of being awarded a commission by the Royal Caribbean Cruiseliners to produce three huge pieces of artwork for the high profile, blue chip company. Some 17 years on, Furneaux joined the Association of British Naïve Painters and has enjoyed many solo and mixed exhibitions in the UK and abroad during his association with the group.Which leads us nicely to Furneaux’s specific painting style.

As a practising and acknowledged fine artist, Furneaux readily describes his style as ‘naïve’ in as much as it’s representative of a very uncomplicated, blocky visual disposition, complete with interesting shapes and frequented with saturated colours. There’s an almost child-like charm and pictorial resonance to its application, a stripped-back counter to over-elaborate renderings. For the large part, Furneaux’s works focus on towns and cities, such as London, Pals and Barcelona in Spain, Hammamet, Altea and Marrakech in Morocco, Montepulciano in Italy and Kos in Greece, whilst his native Cornwall (and Penzance in particular) serves as a perpetual muse. Indeed the artist spends much of his time in Penzance, capturing the beauty of the surrounding environs in his trademark innocent, naïve light, adding further dimensions to the already multi-layered beauty of this Cornish coastal town.

Most of Furneaux’s signature pieces project this innocent perspective, highlighted by a clarity of colour (despite the overall saturated feel on occasion) and onset of defined borders dividing the forms, which while they are grounded in realism are slightly abstracted by the variety of shapes, which ultimately afford the canvas this child-like quality as implied. To extract the maximum light play, Furneaux chooses to commit his painted scenes in the middle of the afternoon, typically.

Furneaux’s body of unique work soon came to the attention of the contemporary art world, and galleries in London offered wall space to showcase his portfolio as part of mixed exhibitions or as strictly solo affairs. Furneaux regularly shows at London’s Curzon Gallery and Blackheath Gallery, while outside of London, Furneaux has exhibited at the Brighton Pavilion Gallery, the Seymour Gallery, Totnes, the Beatrice Royal, Harbour Lights Gallery, Southampton, Thompson’s Gallery in Aldeburgh, the Walker Galleries in Harrogate and La Musée du Prieure, France.Today Furneaux’s work is found in many private and public collections, not least the National Rivers Authority in Hampshire, and his work to date has been published by UNICEF, Marks and Spencer's, Clare Maddicott,Art Cards Cornwall, Canadian Art Prints, Solomon and Whitehead and Roberson among others.