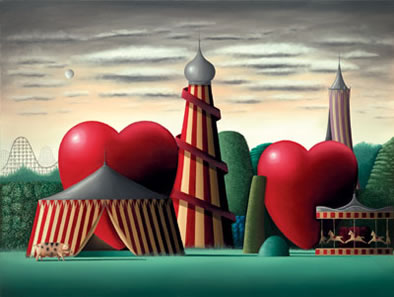 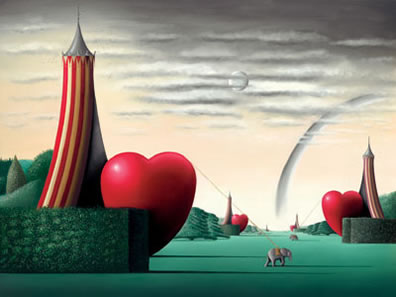 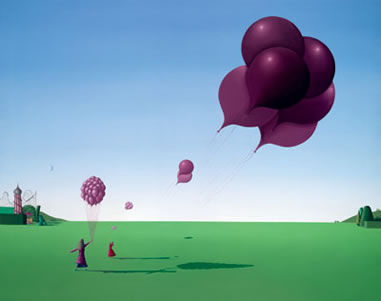 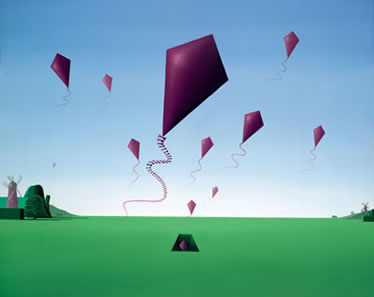 View All Art Works By Grant Searl
His work has found its way onto a host of greetings cards and even Liverpool’s railway stations have succumbed to the highly illustrative appeal of a certain painter going by the name of Grant Searl. Flirting with humour – never better illustrated than when Searl’s pigs are floating about in boats - Southport-born contemporary abstract artist, Searl covers a fair bit of creative genre ground, to be honest. From topiary illustrations (within large posh garden contexts) and colossal hearts gate-crashing hugely absorbing and graphically uplifting compositions to a fixation with the visual cementing of balloons and kites along with more traditional (ish) figurative pieces. And those pigs on boats. It’s fair to acknowledge that much of Searl’s graphically expansive and decadently-coloured compositions wouldn’t have looked totally out of place on a Pink Floyd album cover. Or any Prog Rock sleeve artwork from the 1970s by that token. But instead of that, Searl’s visual powerplay has been screened as big and as bold as you like on the walls of Liverpool’s underground system; more of which to follow.

Searl’s special breed of creativity flies under the four rudimental flags of non-compromise; craft, technology, patience and originality being the quartet of cornerstones on which Searl’s habitual works are constructed. The very nature of his oft larger than life paintings stem from childhood memories, inspirations and popular culture, all of which Searle dips in and out of with regularity. Other than that, Searle is obsessed with books, and has a voracious appetite for the printed word, and from which he draws reference points for the idiosyncratic and stylistic pictorial representations present in the main body of his work.

Christened, ‘romantic surrealism’ there’s definitely an element of Salvador Dali lurking with pleasing intent in Searl’s hallmark oil on canvas studies. Having said that, the third party influences don’t end there, as the eagle-eyed amongst you will doubtless clock echoes of other Surrealist movement exponents including Magritte and Di Chirico, whilst subtle hints of noted Pre-Raphaelites, Millias and Holman-Hunt also creep into Searl’s works. Yet at the very same time, the subject matter is unswervingly 21st Century boy. Aside from the sheer aesthetic and seemingly superficial attraction, Searle is fascinated by the element of subversion which is typically housed in Surrealism, while the quirkier side of Victoriana pleases him greatly as a contemporary artist. The very notion and concept of a folly for example, being a point in question, which for all intents and purpose by well appear as a functional building, yet when stripped down to its lowest common property denominator is but effectively produced for its own aesthetic worth and value to its owner.

Visually lurching from nature, architecture, literature and human relationships, all furnishing Searl’s pieces with a perpetual stream of influential material. There’s undoubtedly a dreamlike, almost ethereal aspect, if not underpinnings to Searle’s towering illustrative presentations, whilst at other times a dark and unruly drama and aching intensity, all laden with and enveloped by a searing atmosphere. Laboriously built-up over a period of months, not weeks or days, layer upon layer of oils inject a depth and vibrancy which is always in plentiful supply.

Searle was the son of a master tailor, and was privy, first hand and up close and personal, to a work ethic which demanded precision and a fastidious attention to all detailing throughout its lifecycle. And as such inherited these all-important genes from his paternal figure which he sought to figure into his later work which has amassed over a 25 year period and counting. But to begin with Searle had to study and master his chosen art form. Which required an educationally profitable stint at Preston Polytechnic – where he studied, well, Art as it happened – before he embarked on a career as an interior decorator on leaving a further educational surround.

This period proved extremely constructive to Searle, as he spent a degree of time in clients’ homes advising and planning, yet simultaneously learning, perfecting and above all else appreciating the craftsmanship indicative of the old artisan skills which are fast becoming a forgotten and near-lost art. The critical part that colour plays, especially in light of the restorative qualities on both the mind and body were absorbed by Searle and then translated through his own future works, whilst he also discovered and acknowledged just how truly original, and for argument’s sakes, traditional, visions and physical manifests can flourish and prosper with a modern twist or perspective.

In terms of Searle becoming a fully fledged contemporary artist, this came about in the early 2000s, and was celebrated in 2004 when leading UK fine arts publishing house, DeMontford Fine Arts, awarded Searle the commercial door-opening title of ‘New Artist’ competition winner, with his prize being the handing of a publishing contract with them, and the seeds of a collaborative and successful relationship were sown then and there which essentially took Searle’s career to new heights. Since then, Searle’s individual pieces and collections have been showcased across the UK, and can be found in several private collections.

Latterly Searle’s work has adorned underground station platforms in and around Liverpool in his native North West, where he was commissioned by regional rail service provider, Merseytravel, to create a series of abstract, life-size mural-type original artworks to be plastered on six underground stations as part and parcel of the ‘Animate the Underground’ campaign.