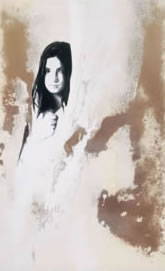 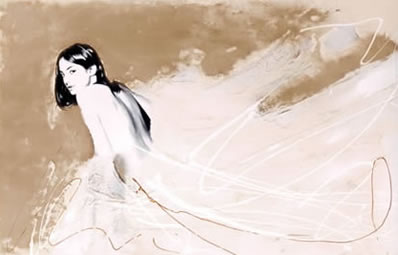 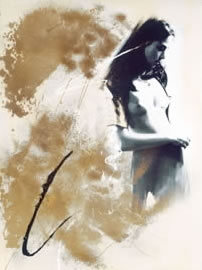 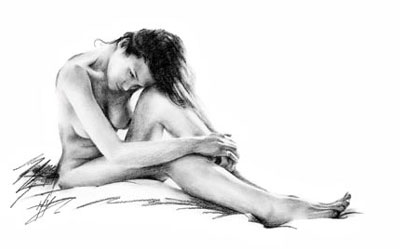 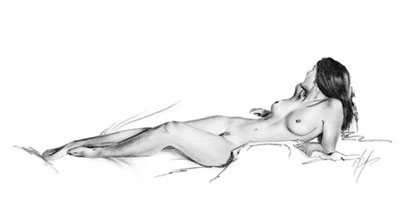 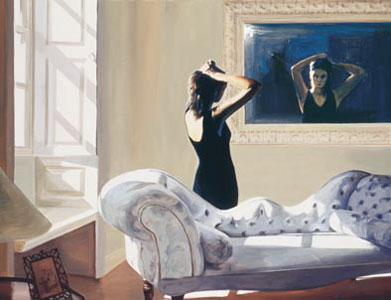 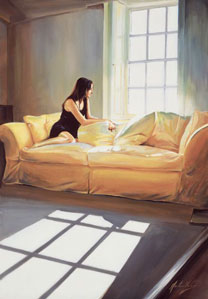 View All Art Works By Melissa Mailer Yates
Acclaimed and ever-popular contemporary portrait (and equine AND floral) artist, Melissa Mailer Yates, has been receiving plaudits as a recognised artist since 1979, during which time she’s been commissioned by a variety of the great and good of the showbiz world, as well as HM The Queen. Yes, THAT one, as well as Her Royal Highness Queen Elizabeth The Queen Mother. Prince Nawaf and Princess Jawaher of the Saudi Arabian Royal Family have also had themselves immortalised in paint, while Noel Gallagher, Russell Brand, Paul Weller, Katie Melluha, et al have all sat in front of Yates, whilst she’s exhibited in London, New York, Aspen, San Francisco and LA amongst other glamorous cities over the years. Yates’ penchant is for female nudes (and semi naked), yet she can’t be pigeonholed in this specific genre on account of her equine and floral works, of which she’s equally as acknowledged in the unique creative delivery of. We think you’ll agree, not bad going for someone who took Art no higher than A-level at school and a lesson to all budding artists everywhere.

Born in England in 1958, Yates says that she indulged in painting pretty much since the moment that she could lift a pencil, and fervently advocates the theory (and practice) that painting should be an experience that necessitates the involvement of every aspect of the body, engendering every sense and every dream, for both artist and viewer of the finished article. There’s no arguing that Yates’ benefit from a wealth of movement, whilst the majority of her paintings contain some percentage of entirely representational material. On this note, Yates decrees the following; “I love to emphasise the subject's innate beauty and life through abstract movements, which are an extrapolation of the emotions contained within the work,” before adding: “Thus my work often centres on an image of a person or other live subject and the kinetic energy that is inherent within it is expressed through colour, material, lines and light”.

Primarily acknowledged as a portrait painter, Yates works out of her Warwickshire-based studio in England, envisaging and going on to manifest this trademark combination of the abstract and the representational with direct visual referencing to the female form. Yates’ last large scale collection focusing on her favoured genre was the graphical cornerstone of an international tour, which proved to be hugely successful in terms of further exposure for her work, networking opportunities and the sale of her works of art. Yates is forthright and articulate when discussing her own work in public, which she has built a reputation for, and on the basis of this finds herself in demand on the art lecturing circuit, general public speaking events and for her writing. On the subject of the written word and Yates has already seen her first title published, the children’s book, ‘The Bogglebott’, a work in progress based on Shakespeare for children and has a novel entitled ‘Packwood’ – described as a historical novel – in the pipeline.

Aside from the United Kingdom her works can be found in many countries including the United States of America, Canada, the Middle East, Africa, Germany, Luxembourg, Norway and Australia. Yates was also elected Associate of the Society of Equestrian Artists 1997, member of the Fine Art Trade Guild in 1998 and Honorary Board Member of the Association of Fine Art Dealers of America in 1999, whilst some of her more interesting commissions include a series of equestrian works for Royal Doulton. In fact, Yates’ superb equestrian work has earned her a number of prestigious awards, emphasising the unusual diversity of her skills.

Yates’ inspirations range from the grace and observations of Degas and the progression of that through the play of light in Mary Cassatt's work, while elsewhere she plays homage to the innovative art of Da Vinci and name checks both Picasso and Braque who Yates considers were pushing boundaries with their art when Monet was still – as she succinctly puts it - exploring light with his lily paintings.