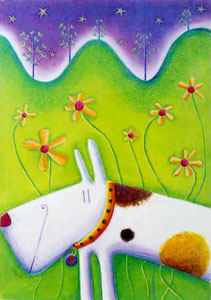 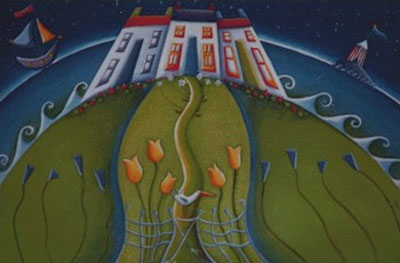 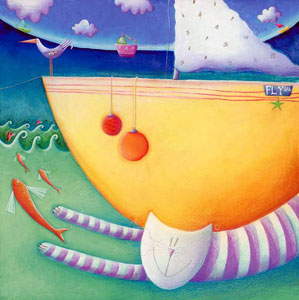 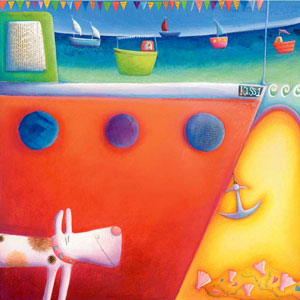 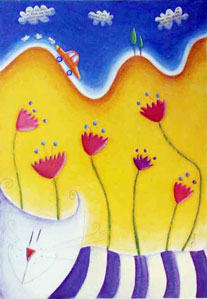 View All Art Works By Libby Lord
With titles like, ‘Wishing On A Star, Magical Shores, Follow Your Dreams’ and ‘Enchanted Dream’, you won’t be altogether rocked to read that celebrated contemporary landscape artist, Libby Lord paints lovely pictures of the sea, harbours, beaches and coastal fringes from her artistically-inspiring bolthole in Dorset on England’s South West coast. Rather than dark, intense and disturbing compositions of post Armageddon landscapes. And animal tend to make more than the cursory appearance in Lord’s paintings too, especially dogs, cats and seagulls. And being typically set beside the seaside, beside the sea, there’s more than a liberal sprinkling of fishing boats, lighthouses, sandcastles and harbourside cottages. All originated and illustratively manifest in luminous pastel-y hues and saturations alongside the more normal blues (sky and sea) and browns (beach), whilst the perspectives are somewhat askew on account of, well, artistic license we guess.

Borne unto a family of painters, Lord began her working life – not as an artist – but as a member of the teaching profession instead, however unfortunate events surrounding a car accident led her to reconsider her life’s goals, and to eventually explore the possibility of a potential career in contemporary art. To begin with Lord created paintings for just family and friends as she mastered the art of landscape and developed her skillset, ultimately gaining confidence in her creative capabilities. As her aptitude and self-assurance within the artistic persuasion grew, Lord wasted no time in hosting small exhibitions on a local scale to determine how far her work had come and acquire some all-important feedback before she ventured any further.

Suffice to say Lord’s art was very well received and on the back of this wave of support she started to showcase her expanding portfolio of original works of art at national arts and crafts fairs. In response to this, Lord was approached by countless private clients to fulfil a host of specially commissioned work, as her reputation snowballed. This validation and commercial endorsement of her artistic prowess and attributes from the public at large convinced Lord that her immediate and long-term professional future lay in contemporary art, and she therein set about launching herself as a full-time working artist.

Those original examples of Lord’s art tended to be semi-abstract studies of gardens and seascapes, committed to canvas in pastels, yet it didn’t take the budding artist long to experiment in the alternate realms of mixed media, which consequently took her compositions to another level, presenting yet another dimension to her hitherto impressive pieces. In recent times Lord has thrown caution to the wind in terms of her approach and application to her personal art, and welcomes the flouting of convention, thus affording further viewer introduction to the more playful and intuitive side of her artistic personality, as Lord’s pictorial creations have grown ever more enchanting and pleasing on the eye. In Lord’s own words she stresses; “I love taking the apparently ordinary and working with it until it becomes something magical,” adding; “I only have to see a rainbow set against a strong purple sky and my imagination starts whirring”.

Lord doesn’t have to look very far for the source of perpetual inspiration, residing in the picturesque, unspoilt corner of the UK she does, yet it’s not just the wealth of natural beauty she has on her doorstep which influences her spiritually uplifting and emotionally gratuitous pieces. Literature is an ever-important part of Lord’s creative arsenal, and as such various quotations can crop up in the midst of her primarily graphic releases. These themes can range from poetry to fairy stories, which again provide another enigmatic and emotional twist to what are already, habitually gregarious studies of local life and times. Rarely are Lord’s paintings not enlightened by the close proximity of intrigue, fun, charm and sentiment, which of course continue to strike chords with her army of fans and increasing numbers of collectors of her work.

Lord’s original works of art (and limited edition prints and original silk screens) are promoted by a network of galleries across the UK, whilst the artist regularly exhibits her work at events and social gatherings.