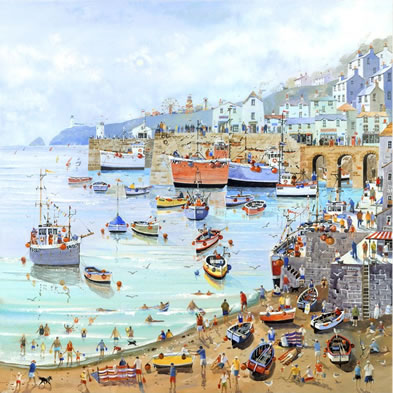 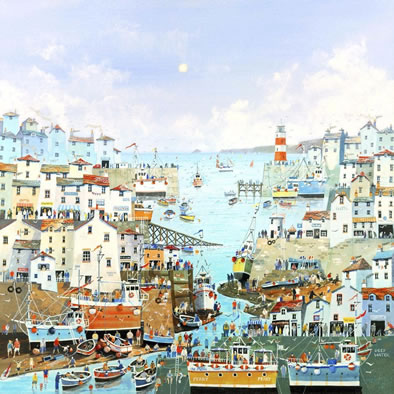 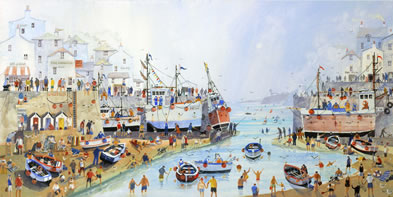 View All Art Works By Nick Potter
As a kid it’s fair to say that you’ll do your level best to avoid attending school assembly; which usually means lots of singing, clapping and not a great deal of fun. Acclaimed contemporary fine artist, Nick Potter was fortunate to be good enough at art (albeit at infants’ school standard) to be excused from assembly, in return for drawing all the animals in his teacher’s ambitious, ‘Jungle Frieze’ plans. For a six year old the subsequent were indeed, impressive, and included the illustrated likenesses of lions, tigers, kangaroos, pandas, chimps and a seemingly rag-tag bunch of animals which rarely live on the same continent, less in the same neighbourhood. But school’s school, etc, and Potter’s teacher was positively beside herself simply because the frieze wall was fully populated, saving their blushes.

This whole episode (and until then, the biggest cause of celebration in Potter’s fledgling artistic career) played out in the early 1960s in an infants school somewhere in Chesterfield (the town of crooked spire fame), having been born a handful of years before in 1959. perhaps Potter’s passion (and prodigious skillset) for drawing/painting animals stemmed from the beautifully illustrated copy of ‘The Jungle Book’ he borrowed off his parent’s neighbour during his early childhood, which a young, easily impressionable Potter pored over for months on end, attempting to replicate the infinite pen and ink-based hand-drawn detailing of the succession of animals which as we all know populated this famous title. Such was Potter’s passion for art (and willingness to learn and practice) from such a tender age, he even went as far as to produce a card to hang on his bedroom door which read, ‘'NICK POTTER, ARTIST. KEEP OUT '. Which of course, only a child could ever get away with.

A happy, contented and comfortable upbringing was echoed during Potter’s secondary school days, as he excelled at the joint disciplines of games and (more importantly from our point of view) art. The only two subjects during school in which didn’t necessitate the wearing of the fairly strict school’s blazer as it happened. Potter went on to be the only pupil in his particular year sitting for his A-Level in Art, and as a direct result received one-to-one tuition at the hands of his art teacher, who Potter even back then considered more a friend rather than merely a teacher, so was their working relationship. What’s more, Potter’s (then) school days sweetheart, a girl going by the name of Gillian, was also something of a talented (if not still budding) artist, with a strong sense of style. In art terms, we’re led to believe, not necessarily fashion sense.

She was (so his story goes) a natural with watercolours according to a clearly besotted Potter, who watched and learned as much from Gillian as from his art teacher back in the day. Buoyed with enthusiasm and a sense of self belief in his fledgling artwork, Potter managed to sell his first painting whilst still at school; the recipient being his Headmistress who forked out the princely sum of £10 for the piece, and with which she suggested to Potter that he might like to splash the cash on a razor. So obviously sporting some early facial fuzz then we deduce from her wry comment.

Although Potter bagged a mightily impressive ‘A’ grade in his Art A-Level exam, he was talked into toddling off to university as opposed to art school, as those in the know/powers that were suggested this would afford Potter ‘proper qualifications’ rather than pretend ones which art would often be palmed off as in some walks of life back then. So Potter decided to read Archaeology at Leicester Uni, like you do, and he threw himself wholeheartedly into what he refers to as ‘student activities’. Which of course covered such typical ground as – and to quote Potter – ‘beer, girls and sport, along with study’. He must have applied himself when it mattered mind, as Potter graduated from Leicester and took up a P.G.C.E course and went into teaching in Chesterfield thereafter. He stresses that this was a reluctant decision, and unsurprisingly it didn’t work out and Potter instead secured a role as an Educational Publishing Rep.

It was around this time when Potter and his wife relocated to Great Bowden which nestles right in the rural heart of Leicestershire, which provided him with infinite inspiration on a regular basis. This, plus regular jaunts to Cornwall, Scotland and the Lake District, in fact, a raft of places deemed of outstanding natural beauty in the event. With frequent exposure to such empowering and evocative landscapes and vistas, Potter grew increasingly interested in landscape as a genre of painting, and started to sketch prolifically, and manifest their final incarnations in watercolours. Potter acquired wall space at several local galleries and his work found itself included in a host of exhibitions during this period, as his passion for watercolours seared. Potter’s watercolours were influenced by the likes of Edward Seago and Edward Wesson, in who’s style he attempted – but failed – to ape, describing his personal style more akin to being somewhere between James Fletcher-Watson and David Bellamy. This rankled with Potter who grew frustrated at his seeming inability to paint in the exacting style that he wished to, that’s despite illustrating a couple of children's titles and a cookery book at this time.

Potter returned to his native Derbyshire in 1988, whilst his two children were still young, and continued to be a slave to the more commercial wage, wary of being a parent and having a mortgage to pay, so putting any ideas of painting for a living well and truly on the back burner. However, unforeseen events changed Potter’s way of thinking in many ways, when his father passed away before his and his young son’s eyes, highlighting the frailty and transient nature of life. This tragic incident made Potter take a look at life from a different perspective, and the upshot of it was to follow his heart rather than his head which he had done to date. That wasn’t before more heartache when Potter’s frustrations signalled the end of his marriage and the desperate need for a fresh start.

This new beginning was ushered in with the purchase of a small cottage, of which Potter transformed the main bedroom into his art studio, and he set about painting. He quickly discovered a vibrancy for silk paints, which he’d never experienced before, and started using them like he would watercolours, and before long he became not only excited by his new mediums but very accomplished in their committance to canvas. A series of events, including finding a new partner and moving in to a new house together, also signalled another new chapter in Potter’s art career, one which resulted in his new partner setting up a company through which to sell his paintings and greetings card line to retail outlets around Derbyshire. ‘Altered Images’ performed well, and in tandem with Bakewell’s Treeline Gallery’ (who afforded Potter his debut solo exhibition in which he showcased 70 pictures), his artistic star definitely was in the ascendancy at long last.

A couple of years later, Potter and his new partner became co-owners of Charisma Gallery in Matlock, Derbyshire, which proved an even more successful way of exposing Potter’s creative talents and witnessed paintings and cards flying off the shelves pretty much from the outset. At this juncture Potter began toying with acrylics too, whilst all the time making artist friends, networking and hosting previews and exhibitions from this new base. In Potter’s own words; “The success of my work in the gallery encouraged me to approach other galleries. I recently had work in 16 galleries from Scotland to Cornwall,” adding; “Selling work in other galleries gave me a lot of confidence, as did the constant support of family and friends”.

In the aftermath of experimentation with a new mixed media technique, Potter was encouraged by an artist friend to submit work to Washington Green, who were impressed with his work and snapped him up straight away, with Potter concluding; “Thanks to Washington Green my dream of becoming an artist has been eventually realised”.