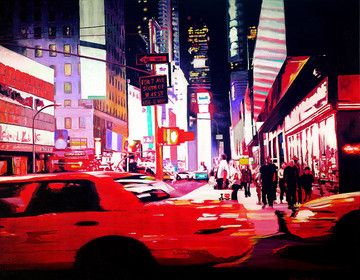 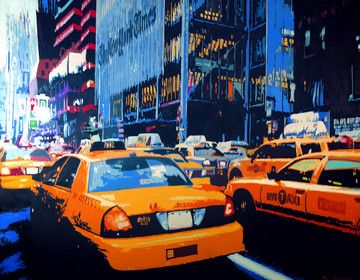 View All Art Works By Brian Shepherd
Question: What naturally occurring phenomenon takes place when a love of urban architecture and a passion for popular culture collide?

Also, how many artists do you know who combine art with being a psychic? Just the one that we’re aware of, and that’s Brian Shepherd, again.

That’s right, acclaimed contemporary urban landscape (and psychic – more of which later) artist, Shepherd has a fascination with modern city life, and the daily cut and thrust of iconic cityscapes, and makes it his business to seek out (and visually capture) the essence of all these comings and goings, played out at a million miles an hour and through more lenses and filters than a professional photographer could shake a tripod at. Shepherd’s intense and intrinsically dynamic oil paintings look at certain elements and transient vistas that otherwise we take for granted, thrusting them into the forefront of his pictorial metropolistic awakenings, inviting even man, woman and child to consider for a moment if we will, the aesthetic and superficial values of the world that envelops us. Prosaic thoughts indeed.

Shepherd’s own journey began back in 1948 in the less than (with respect) urbanely splendiferous, Salisbury in Wiltshire, where as a youngster he showed accountable interest in sketching, drawing and painting; enough to ensure him a place at Salisbury Art College on completing his secondary education, where Shepherd opted to study painting and graphics. After graduating, Shepherd ventured forth into the highly commercial world of advertising, where he assumed a role as an illustrator, all the time honing his skills in conventional painting and illustrative disciplines and material/medium application, whilst simultaneously perfecting the art of the airbrush. A brilliantly adaptable and versatile painting medium, which lent itself well to the advertising industry through the 1970s and 80s.

By 1985, Shepherd brandished enough illustrative attributes and commercial experience to go it alone so to speak, and decided to launch his own custom art business, with his (by now) formidable airbrush expertise being his major USP when touting for potential clients. Shepherd quickly built an impressive reputation as a freelancer, especially for illustrations specifically originated and applied to motorbikes, trucks and guitars. So anything a teensy bit redneck or Hells Angel in a sense. Although as we hinted before, airbrushed fuel tanks, body panels and instruments was very much de rigour during this glam period, so it was very much a case of being in the right place at the right time as is so often the case. Having said that, you must have the considerable talent to thrive, which clearly Shepherd did and still does.

And despite evolving and expanding his range of illustrative arts (and client base it would appear), Shepherd hasn’t looked back since going solo as a full-time artist, having undertaken a magnitude of diverse briefs and commissions over recent years, both from individuals and companies such as Harrods, Harvey Nicks, Planet Hollywood and the Arcadia Group, alongside of fulfilling illustrative criteria for a raft of private collectors.

Away from his more conventional 9 to 5, Shepherd also uses his art to a more, how can we put this, spiritual effect, literally, as alongside of being a celebrated contemporary artist, he’s also recognised (perhaps even wider) for his psychic skills too. A regular part of the team on popular TV shows, ‘Most Haunted’ and ‘Ghosthunting With’ as he’s been for several years now, Shepherd brings his creative skills to the televisual table when called upon for the sake of light entertainment documentary making, where essentially he creates the physical likeness of what his co-presenters envisage/feel whilst they communicate with the deceased. As strange as this may sound, this partnership works well on the small screen and his contribution to the series is well received by the show’s loyal followers.

Shepherd is a firm believer in psychic powers, and first became aware of his psychic provenance during his late teens, and while attending Salisbury Art College, when his grandmother – herself blessed with psychic abilities – passed over. In the direct aftermath of this event, Shepherd fervently believes that he inherited her psychic powers and abilities to communicate with the spirit world, and in his case it manifests itself thorough his art, speaking of the way in which he ‘sees’ an image of the departed, which he can then commit to paper/canvas/various surfaces on behalf of others/programme making. By this token, Shepherd prefers the label of ‘psychic artist’, as well as his more ordinary, ‘contemporary artist’.

Whether you’re a believer or not, what isn’t up for debate is the underlying fact that Shepherd has seen his work exhibited in galleries throughout the UK and further afield, across Europe over the years and continues to be a popular, collectable figure on the contemporary art scene. In his own words; “Art is art..... Everything else is everything else, the romance is in your living space.”