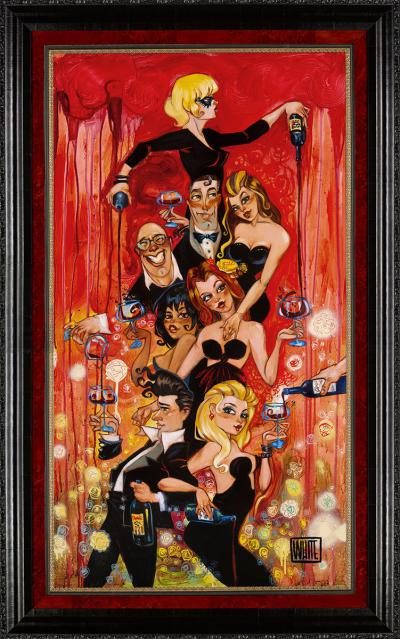 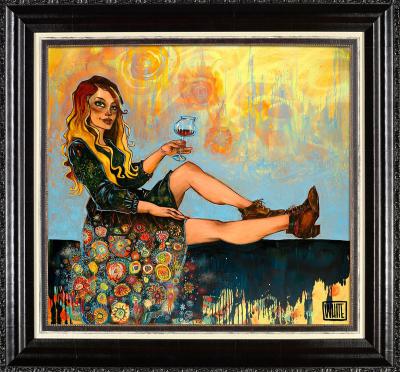 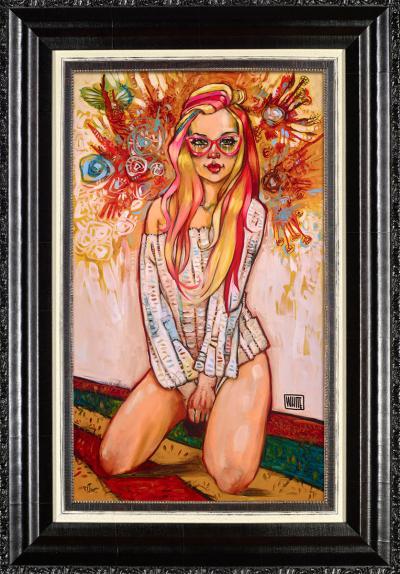 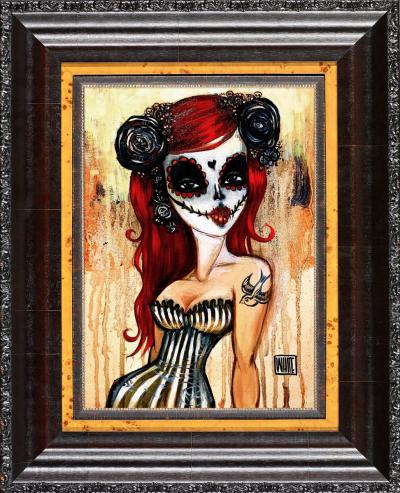 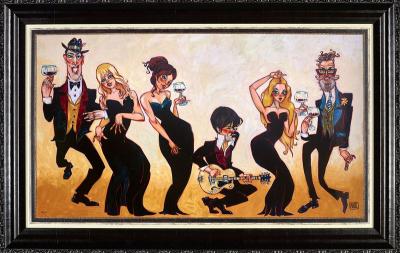 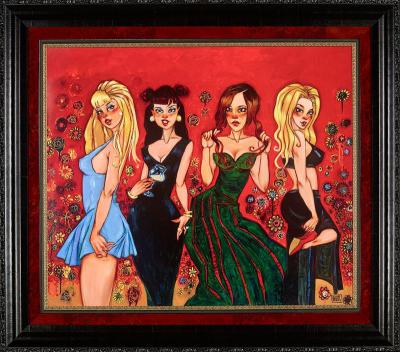 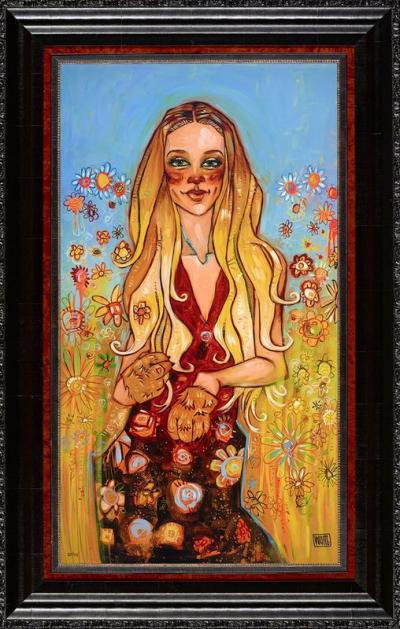 View All Art Works By Todd White
There’s something so darn wrong, yet conversely, so right about Todd White’s work that it almost hurts. Retro, yet smack, bang contemporary at the same time. Downright sexy, however equally reserved. With just enough reveal to keep polite circles happy. Indeed, words like cheeky, risqué, witty, daring, provocative, sophisticated, sleek, raunchy, fun and frivolous seep through every pore of a typical White canvas; which is absolutely fine by us. The man/artist behind the art is every bit as full-on and perceivably naughty as his oft-raucous subject matter, which will surprise nobody to learn, and his special brand of larger than life art is in massive demand pretty much all the time. But just who is Todd White you ask? Well, pull up a pew and we’ll begin.

Born in the lone star state of Texas, Americana in 1969, Todd White is a critically acclaimed contemporary figurative artiste with a viciously funny take on a creative world and whose witty illustrative observations make all the right graphic noises. After enjoying a non-descript childhood, a still youthful White headed off to them there Hollywood hills to seek his fame and fortune, like so many have done before. Side-swerving bar work and pizza delivery, White landed himself a solely artistic gig at the world famous Warner Brothers Studios; on account of his creative bent.

In his new role of animator, White quickly rose through the art studio ranks as his unique visual style developed and evolved with each project he collaborated on. Amongst those were the insanely popular children’s animated shows such as ‘Tiny Toons’, and the slightly older children’s animated shows, such as ‘Ren&Stimpy’. Although relatively box office, White’s illustrative career went KERCHING! From 1999, when his work was set to go major box office.In terms of kids toons, any road. Working with Nickelodeon bods, White was handed the Lead Character Designer role on a new show called, yup you guessed it (or perhaps not), ‘SpongeBob SquarePants’. Proving an overnight success, White began believing his own hype a little too much maybe, as colleagues recall him thereafter challenging all comers to regular kung-fu fights on the studio’s parking lot roof, whilst regularly rocking up to work in a bolero hat.

Inevitably, and after a few years basking in the radiance of his cartoon creation, kids’ notoriously fickle interest/attention span for SpongeBob waned, and with it White’s passion for working on behalf of ‘the man’. Instead, he’d long harboured the dream of doing his own thang, alone, and striking out as a professional artist in his own right. Spirited both physically and emotionally, White threw his energies and raw and rampant creativity into getting his personal work noticed on the hard-to-break LA gallery scene, and traipsed all the usual venues and watering holes/haunts of the rich and famous flaunting his flamboyant interpretations of an imagined universe populated by Martini-soaked scenes of natty cads and sultry vixens.

Eventually White talked bar owners into hanging his art from their celebrity-encrusted walls, as he grew tired of attempting to flog his work from the back of his pick-up truck, strategically positioned outside of neighbourhood art fairs in downtown Los Angeles. His perserverence paid off, and White’s painting began to shift in volume, so much so that he ultimately closed the door on commercial animation for good and left the studios which had been a secure home ever since he pitched up in Hollywood. Success quickly followed both awareness and recognition, with reputation gaining its own foothold thereafter, as White was suddenly noticed in all of the right places for all of the right reasons according to him. Over the next period of time White became the unelected poster boy of the LA contemporary art set, attending all the right gatherings and schmoozing all the right people. And that, essentially is the short story of Mr White.

Figurative expressionism is the tag or label which hangs from White’s neck if indeed he must wear one to describe his extraordinary artistic wares, although ‘observational artist’ is another moniker which tends to have stuck too. Our personal favourite however is the ‘Rat-Pack meets Picasso’ casual evaluation of White and his work, fired off sometime in recent history, which kinda suits if you ask us. White’s certainly courted the industry plaudits since turning professional and making his name in his genre, which was kick-started in 2007 when he was earmarked from hundreds of competitors to assume the mantle of the Official Artist of the GRAMMY® Awards that particular year.

18 months down the line and White was being invited by Warner Bros. to contribute to a major design exhibition celebrating the 70th Anniversary of The Wizard of Oz, which thereafter toured some of the world’s most culturally significant countries, from London, England and Dubai, to Toronto, Canada and Japan amongst others. In 2010 White worked with Coca-Cola, producing six unique sketches which became collectors editions immediately on release, while that same year his first book was published, which comprised not just an autobiographical content and appeal but a host of original sketches to boot.Like the man himself, White's work is infectious, capturing the attention and imagination of art collectors around the world in addition to many Hollywood celebrities, as his reputation has been stamped not only as an exhilarating and revered artistic talent but also something of a style icon, as the creator of highly collectable and much sought items of designer decor.