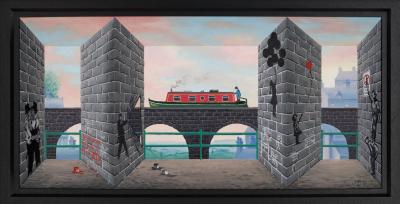 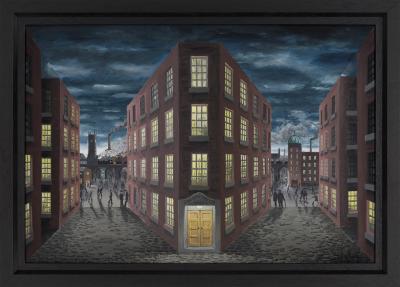 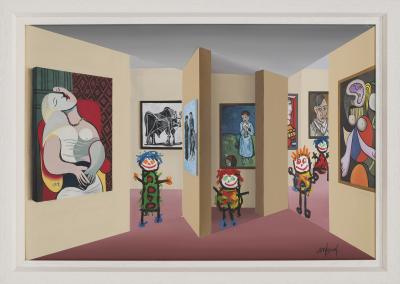 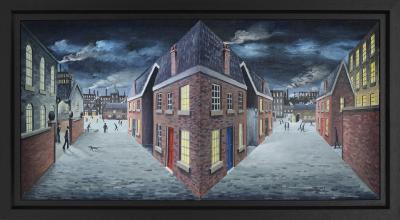 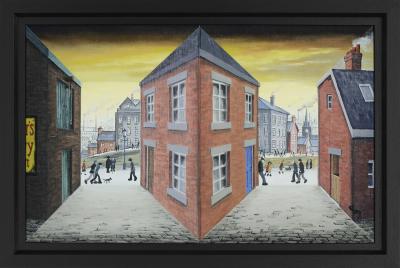 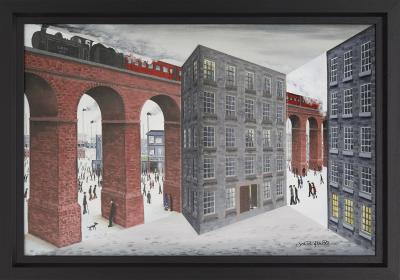 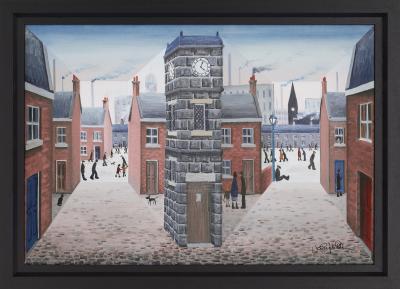 View All Art Works By John Wilson
Close your eyes for a moment and just imagine how a five year old would complete a self portrait of themselves. Or alternatively, draw a picture of mummy and daddy, their big sister and spotty the family dog. An honest image, yes. Perspective a bit, well, skewed. And probably everyone would have a triangular body, sticks for limbs and a mass of unruly hair. And look pretty much identical, apart from the dog which would essentially be a scribble with four legs and a prominent tail. So now you have the starting point for the majority of contemporary artist, John Wilson’s wildly exuberant, vividly coloured, unashamedly childish visions. Save for painting in a backdrop that only an adult would have the required creative attributes to not only envisage, but execute.

Wilson was so gobsmacked with his youngest daughter, Stephanie’s self portrait, committed as a five year old at playschool with the help of conventional wax crayons, that it provoked a complete new way in which he would look at art. Not to put too finer point on it, through a child’s innocent, uninhibited eyes. Something most of us would breezily dismiss once we’d trotted out the ritual “Well done, that looks lovely” line and Blue-Tacked this work of art to the fridge door. Not so Wilson. He then made it his work to establish just what it was that made a child paint in such a manner, as that day something inescapable had grabbed his attention. Not only was the colouration eye-popping and free of restriction, but the composition of his daughter’s self portrait was full frontal. As was other children’s artwork he made it his business to seek out immediately afterwards.

Pretty much every time a child was asked to draw or paint a self portrait, the finished article would form a front-on elevation. Strangely however, should that same child interpret a pet or animal in general, and then this would be captured in profile. This made Wilson recall to mind something Picasso had once quoted as saying. That as a child he himself had observed everything around him through adult’s eyes, and committed this to his canvas as such. Whilst latter as an adult, he tried to reverse this effect, yet to little agreeable avail.

Spurred on by his newly-arrived at, sunnier disposition on all things artistic, Wilson concentrated his artistic efforts on merging one outlook with the other so as to create a uniquely, emboldened visionary piece; his concept being to intersperse these child-like renderings of themselves, set against a more conservative backdrop of domesticated bliss and visits to art galleries. Simply being caught in very natural, unpretentious vistas. Wilson is the first to admit that landing on a subject matter for a painting can be a thankless task, and can ultimately be sought from a wholly inexplicable source. To underline this, Wilson recalls the time he attended a David Hockney exhibition, where his eye was instantly caught by what he initially believed to be a painting of a flight of stairs leading up to a marble arch, with the sun set in the background. Yet on approach was surprised as his perception couldn’t have been further from the truth that now confronted him. A wooden table standing on a balcony overlooking the sea, just for the record.

Wilson was just 10 years of age when he first grabbed the artistic limelight, winning first prize in a school Easter card designing competition, which prompted him to continue drawing with much gusto. Usually pictures of aeroplanes and cars, Wilson’s then most favourite things. Yet it was a Christmas present received in his 12th year, which would change the fame for a young Wilson. A set of oil paints and an easel allowed a fascinated young Wilson to explore and experiment with a full palette of vibrant colours that had eluded him hitherto. Then there was no stopping him.

Saturday morning painting classes then beckoned for an art-addled early teen, which Wilson signed up to at the Harrogate School of Art and which he attended for two years. Soon after, Wilson complimented what he’d learnt there by enrolling on a part-time evening class, where he gained a first insight into figure painting and the Pop Art movement; two aspects that he’d use in albeit different, unconventional ways in later years when Wilson painted for real (that said, and shortly after finishing the course, Wilson’s Pop Art-inspired self portrait was awarded wall space in an exhibition held by Harrogate Art Gallery). And it was many years after – the mid-1990s in the event – when Wilson finally had the opportunity to establish himself and his unique art to a wider audience than previously. That’s because, as befalls many blossoming artists over the years, life happens. And in Wilson’s case running his successful small business, marriage, mortgage and the raising of three daughters over what amounted to quarter of a century. However Wilson had kept his artistic hand in over the years, enjoying painting as a hobby during the interim period.

The rest as they say is history, as now Wilson’s trademark intensely-coloured (and child-like populated) gouache works are exhibited in galleries the length and breadth of the UK and farther a field on a regular basis, and he’s quickly gained a loyal fan-base and received critical acclaim amongst his peers and contemporary art connoisseurs alike. Wilson explains that painting accounts for most of his time these days, and concludes that he goes to bed thinking of his latest composition and awakes with a concept for his next.