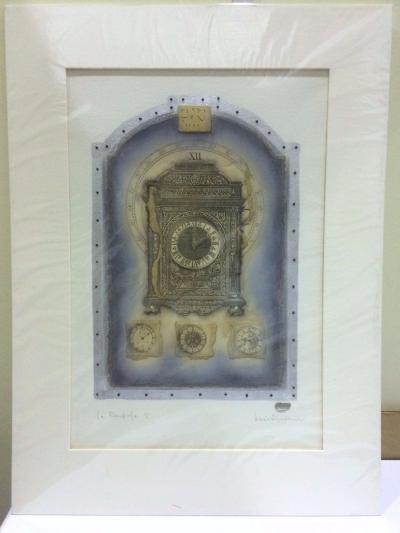 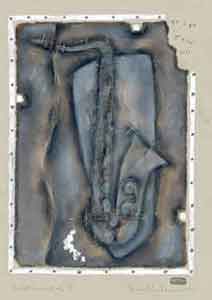 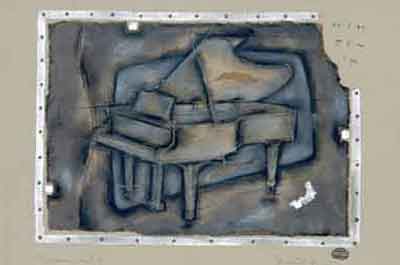 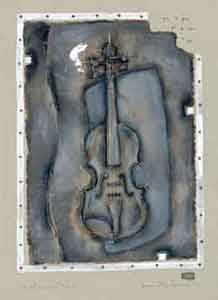 View All Art Works By Kevin Blackham
Contemporary still life and landscape/cityscape artist, Kevin Blackham’s brand of art is truly unique. A much bandied around word, we know, however on this occasion – and to the best of our knowledge – factually correct. To our minds there’s simply no contemporary art of this magnitude out there at this moment in time. This hand-crafted, mixed media, repeatable original artwork which succeeds in grabbing your undivided attention at every opportunity. Facilitating his technical line drawing skills, Blackham then layers his images on sumptuous heavy watercolour paper before applying acrylics, charcoal, pastels and metal leaf to the heady creative material mix which combines to such illustratively devastating (in a good way, obviously) effect. This stunningly classic look and feel to Blackham’s art is completed by the introduction of his sublime calligraphically turn of hand to typically seal all matters pictorial.

As with many artists irrespective of genres in which they’ve gone on to shine in, Blackham showed creative promise from an early age according to those closest to him during his childhood. Born and bred against the rural backdrop of the Shropshire farming community, as a seven year old Blackham gave his immediate world the first glimpse of his dormant talent, as he scooped top prize in an inter-school handwriting competition. This recognition of Blackham’s talents led to the budding artist launching his very own sign writing company – winning a host of design-based commissions from local companies – whilst he was still attending secondary school, believe it or not.

On completion of his A-Levels at Ludlow College in his native Shropshire, Blackham upped sticks and relocated to Surrey to commence his four year Degree course in Graphic Design at Reigate School of Art and Design, where he elected to specialise in the disciplines of hand-lettering and calligraphy. After graduating Blackham entered the publishing industry in London, and secured himself a role as a graphic designer; where his remit was the origination and design of promotional materials and book jackets for a number of top titles of the day. In the background however, Blackham plugged away with his own personal art for pleasure first and foremost, yet inevitably being recognised and gaining commercial exposure for this was just around the corner.

Being based in London Blackham had access to an enviable network of movers and shakers and soon found out the best places to hang out at the optimum times for getting noticed, creatively-speaking. And in 1997 one of his experimental mixed media compositions was exhibited in one of the capital’s most prestigious venues; Harrods Gallery situated in the heart of Knightsbridge. It wasn’t long after this successful debut that fine art publishing companies were themselves beating a path to his door with promises of gaining Blackham the shop window that he craved. One such company was DeMontford Fine Art; itself one of the UK’s foremost fine art publishing houses that have a plethora of household name contemporary artists on their books at any one time.

Obviously impressed with what they witnessed then and there, DeMontford were very keen to work with, and hopefully represent Blackham going forward in a professional context and soon after meeting each other’s acquaintance started collaborating with one another. This working relationship effectively helped launch Blackham’s new career as a full-time artist, and has seen his work and reputation go from strength to strength with the support of DeMontford to date. As his prolific portfolio of original mixed media work, which combined his love of calligraphy with a wide variety of different techniques, has borne numerous fine quality limited edition reproductions, so has Blackham’s artistic stock risen.

Indeed, by 2000 Blackham had received a nomination by the Fine Art Trade Guild in the category of ‘Best Up and Coming Artist’, while in the same year bagged the prestigious title of ‘Gift of the Year Winner 2000’ for his piece, ‘L’Architecture I’. Blackham followed this initial success up in 2002 when he added the’ Best Selling Original Print Artist’ award from the Fine Art Trade Guild to his burgeoning collection of gongs. Today, Blackham spends his time creating his unique compositions from his home studio set in the Gloucestershire countryside, and regular acknowledges his individual pieces and collections finding new homes both in private collections and galleries throughout the UK and across Europe and America.