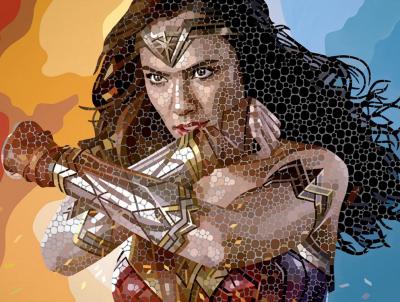 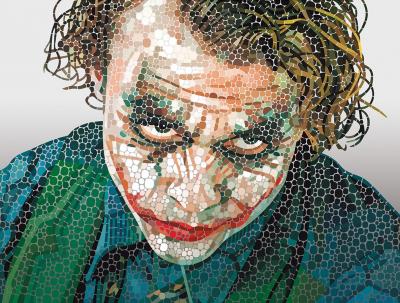 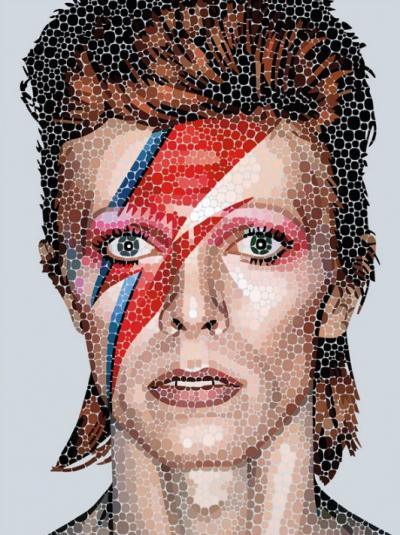 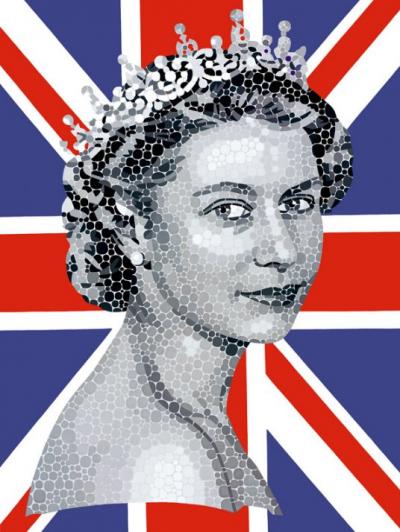 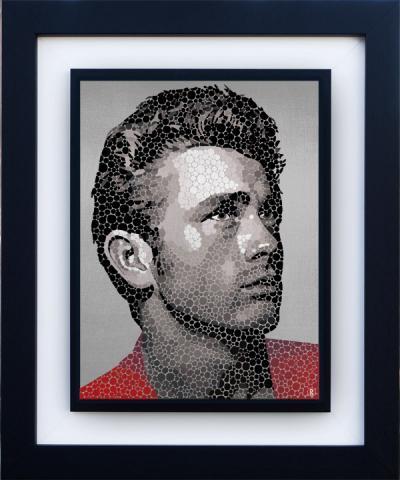 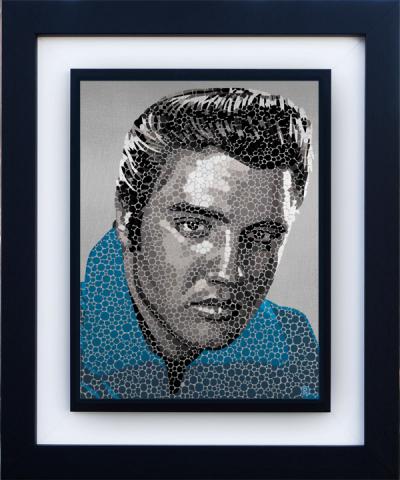 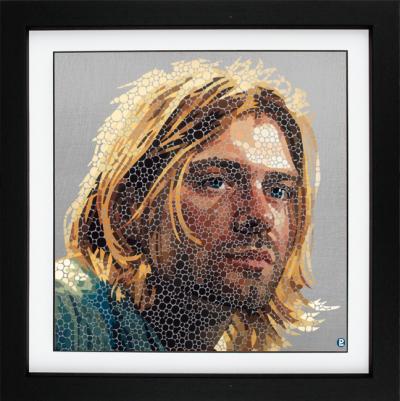 View All Art Works By Paul Normansell
‘Contemporary, pointilism meets pop art with a modern twist.’ The words of the artist himself in a recent interview when asked to describe his work. An artist who is regularly compared to Pop Art royalty, Warhol and Lichtenstein and who’s been hired by indie rockers, The Killers to originate album artwork in recent times. An artist who manifest hugely popular abstract portraits of instantly recognizable icons of popular culture, be they strutting their stuff on the music or catwalk scene. So, of whom do we speak? Paul Normansell as it happens. A formidable and prolific (not to mention critically acclaimed) contemporary abstract portrait artist extraordinaire who fuses pop culture, reality and emotions together as the three over-riding concepts which underpin Normansell’s signature works.

The big(ger) time came (and the commercial jackpot hit) back in 2008, when leading men’s style bible, GQ magazine featured a dot painted portrait of one of Normansell’s seminal canvases. Then still a relative unknown artist, unbeknownst to Normansell (and GQ) a certain Brandon Flowers (lead singer of The Killers) saw the illustrative piece and (through his people) contacted Normansell with an invite for him to design the Las Vegas-based band’s third album. Before we go any further, we’d just like to point out (if you pardon the pun) that the GQ spread of Normansell’s work profiled one of the most photographed, painted and stylized icons of modern day pop culture and is the unofficial face of the indie generation; with her mug appearing on magazines, billboard advertising and ‘cool’ music videos left, right and centre over the past 20 years. Therefore Kate Moss was a natural choice for Normansell to capture in his own remarkably unique dot matrix fashion it would seem. The same could be said for fellow, well-papped supermodel, Agyness Deyn, who he’s also created a stunning portrait of, and whom is held in equal esteem amongst the fashionistas of this world.

Anyway, to cut a long story short, Normansell was the artist behind the band’s ‘Day & Age’ CD artwork and all the associated inlay gubbins and promotional material which accompanied its release back then. Globally. Which is a pretty impressive shop window for your work by anyone’s standards. What resulted from this exposure even Normansell couldn’t have predicted, as MTV voted it the best sleeve cover of the decade, whilst Rolling Stone magazine called it the best album art of 2008. Not bad plaudits at the end of the day.

So, what do we know of Normansell? Well, he was born in Birmingham in 1978, into a working class family, where by his own admission he paid very little attention at school, instead focusing his efforts on fillings his exercise books with doodles. It was at this very early juncture when Normansell first started experimenting with circles and dots, which went on to become something of a trademark of his. According to Normansell himself, his art teacher – Mrs Kimble – spotted his artistic endeavours and quickly took him under her wing. Throughout his youth and adult life thereafter, Normansell has been influenced by music, and lists it as one of his passions. Moreover, its very existence has provided the inspiration behind much of his work to date. In those early days of experimentation and creative self-awakening,

Normansell speaks of going through his phase of producing ‘visual sound’ imagery. In his own words he says; “The foundation of my work originates from the relationship between art and music. I wanted to try and create a link between colour, shape and sound,” going on to add; “My abstract paintings are based on colour studies exploring how colours can stimulate feelings, emotions within a person, the different meanings each colour has, and it's power to evoke a certain response from the viewer”. Continuing on this same tract, Normansell concurs that he; “Created a technique that is so unique it has to be done using a very fine brush. This helps me to create a perfect likeness and because of the plastic finish of gloss and the meticulous execution, the paintings are almost doll-like in appearance”.

On graduating from the Birmingham Institute of Fine Art with a First Class Honours Degree, Normansell wasted no time in getting his work out there and in the public’s conscience, buoyed by the reaction from his final year degree show, which ended with approaches from art galleries expressing an interest in exhibiting his work. In the event, Normansell’s debut post-graduate collection was immediately sold out, despite the price tags on some being comparatively high for a fledgling artist. £1,200 being considered a large sum for an emerging (yet commercially untried) artist. In the immediate aftermath of this showcasing, one interested gallery owner signed Normansell up, then and there.

A pivotal turning point in Normansell’s creative evolution as such arrived with the release of his unique and quirky portrait work, which of course offered a seismic cross-over into mainstream fashion on account of its involvement with on-trend supermodels of the day, including the aforementioned Moss and Deyn. This work subsequently made high profile fashion brands sit up and take notice of this new (arty) kid on the block, as Normansell’s work steadily began appearing in ultra-cool style journals here, there and everywhere. There followed the pre-mentioned Killers commission in 2008, followed by a string of further sell out shows. On the back of all this media exposure, Normansell’s work quickly became sought after far and wide, including Japan, America and Australia.

‘Forever 27’ is Normansell’s very latest collection, which concentrates on uber cool, pixilatedly fabulous music legends who have joined the infamous and notorious club, where all members share a common thread of having met their maker at the age of just 27. The late Kurt Cobain, Jim Morrison, Amy Winehouse and Jimi Hendrix being amongst their high profile numbers.