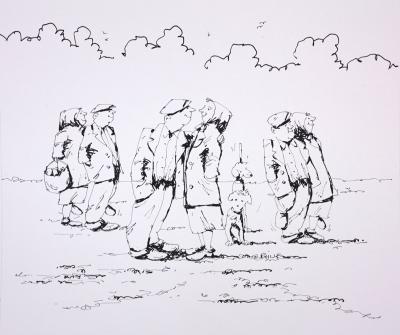 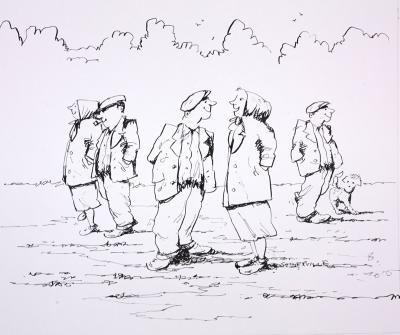 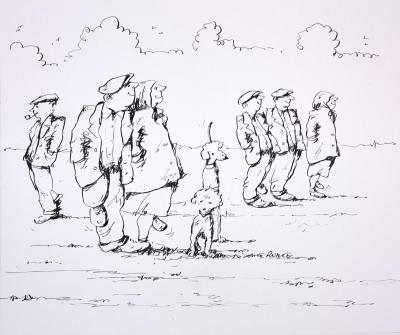 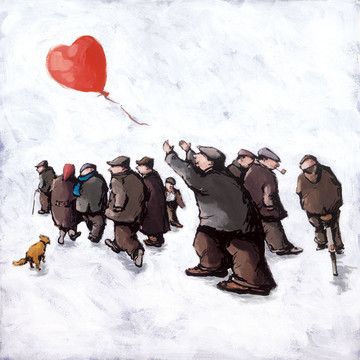 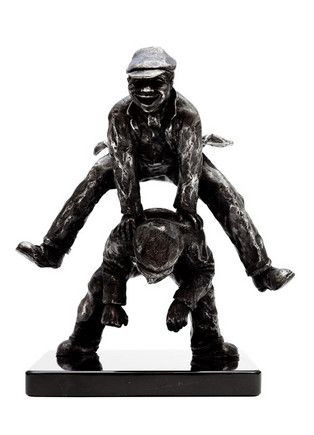 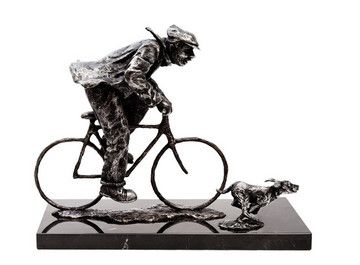 View All Art Works By George Somerville
Cheery, breezy and upbeat in the main, contemporary landscape and figurative artist, George Somerville’s keynote paintings capture the very essence of the working man of yore; only at rest and play rather than their place of labour. From walking the dog and riding his bike, to flying kites and constructing shed-built go-karts, Somerville has successfully caught many touching and insightful, warm and sometimes fuzzy, yet always deeply illustrative moments in time through his acutely-depicted, generation-embracing compositions. To the trained eye there is undoubtedly a degree of Alexander Millar-esque pictorial love letters to an almost forgotten and neglected age present and graphically correct within the very fabric of Somerville’s pseudo-whimsical visual content and both physical and emotive perspective.

Born and raised in a tough, working-class area of Glasgow during the 1950s, the sights, sounds and smells of heavy industry hung large in the immediate air and punctuated every street panorama; be they foundries, factories or the omnipresent steelworks which characterised these city quarters during this favourable period and homespun industrial climate of then and there. And Somerville found himself in the thick of it, taking in everything he witnessed, which eventually would serve as the perfect back catalogue to dip in and out of at will when circumnavigating his future canvases and sculptures which focussed very much on men folk at ease, making the most of their down time away from the disciplined shift work that marked out their working life.

As the industrial age waned and the draconian buildings which housed monstrous machinery were no longer needed, lay idle and were finally usurped on the urban landscape, it was the characters which were cast all along in Somerville’s pieces who gained centre stage, as he concentrated increasingly on their leisure time roles and social practices rather than the once dark and foreboding backdrops. Visually scrutinising and documenting this innate sense of community and self-preservation, Somerville’s knack for illustratively encapsulating a people, rather than individual person, is magnanimously projected in his portfolio, and one which marks his work out in an often busy genre marketplace.

Born in 1947, Somerville’s father was a foundry worker himself, and the family as a whole had to watch their purse strings, with luxuries being something of a rarity. Therefore Somerville didn’t attend art college straight away, due to financial constraints at that particular time; however he did attend in 1965. The establishment where Somerville further developed and evolved his creative talent was the prestigious and acknowledged, Glasgow School of Art, which has seen its fair share of big name artists pass through its doors during its time.

On graduation from the aforementioned seat of artistic learning in 1969, Somerville entered the world of work in the capacity of an Illustrator, securing roles with some of Glasgow’s biggest advertising agencies, where he continued to make a successful and rewarding living for a number of successive years in total. Eventually Somerville offered his illustrating at a more freelance level, finally turning his back on it as a career, so as to launch himself as a bona fida professional fine artist. It wasn’t long before Somerville’s art started grabbing the local and regional headlines, thus attracting the attentions of leading galleries located in key areas, and Somerville began gaining the credits and plaudits which his personable and characterful work deserved.

In terms of his style, or rather the application and administration of his materials, mediums and methods relied upon, Somerville concurs that it’s quite a sporadic and seemingly spontaneous practice. And that from the juncture in which he agrees on the muse, his brush activity is one of frenzied, whilst his recent sculptures obviously tend to be manifest with a little more decorum and time consumption we would have thought. Somerville’s influences outside of his inherent childhood ones, tend to stem from this same formative period in his life, and comprise of a cross section of famous names. Yet Somerville cites his preferred reading matter as a youngster – classic comics and graphic novels – as his main inspirations to take up art

Home to Somerville is nowadays in the small fishing village on Scotland’s east coast, having spent the majority of his life residing and working out of Glasgow. The much sought after artist’s signature works hang from a host of both private and corporate collections across the world, quite literally from the south of France to the north of Canada and beyond.