View All Art Works By Birim 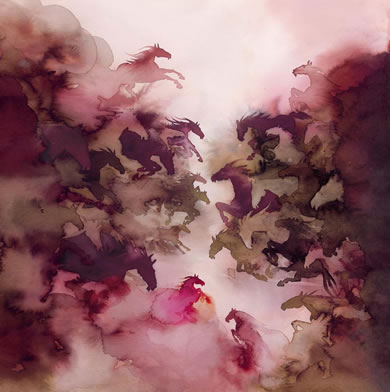 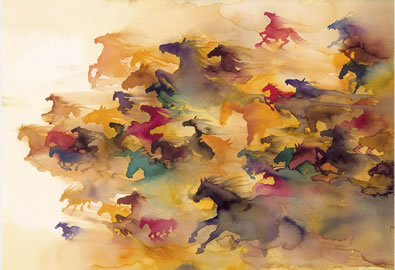 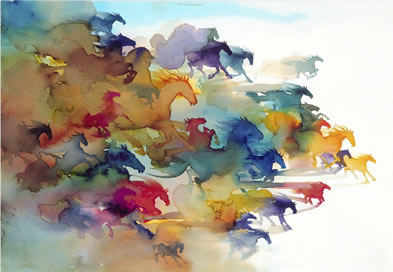 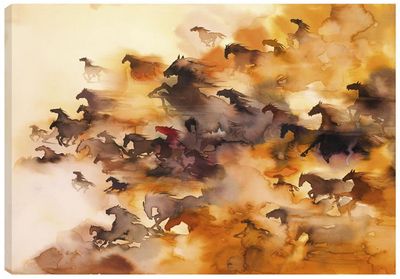 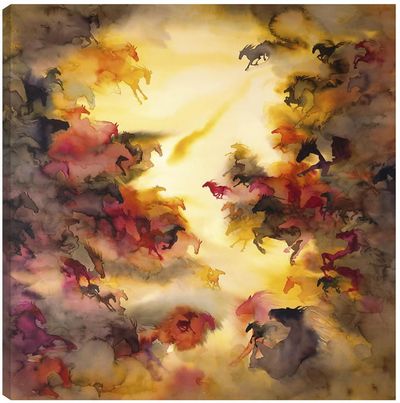 View All Art Works By Birim
As far removed as it creatively can be from the subject matter of riders and romping author, Jilly Cooper, celebrated Turkish contemporary animal artist, Birim Aksüyek also clearly has a passion for horses. However any additional comparisons resoundly stop there, as we learn of Birim’s particular skillset and justifiable claim to artistic fame. Which manifests itself, graphically, as these thoroughly absorbing, larger than life compositions which habitually feature a succession of equine thoroughbreds charging through and (almost) out of one of Birim’s signature canvases. This (almost) 3D effect is simply breathtaking when stood in its highly illustrative presence, and we can truthfully admit that it’s like nothing else we’ve ever had the pleasure of clapping our eyes on before. Weight, balance, colouration, light and general composition is second to none and takes the image way beyond the term, enchanting, and into borderline mythical, fairytale visual territory.

Born in Bursa in Turkey in 1958, Birim was brought up around horses and was always fascinated in their very being and company. It was therefore little surprise to those close to him when he expressed his intentions to study to become a vet, which he duly did. Yet at the same time Birim practised his other great passion in life, painting, and naturally enough the subject matter would more often than not end up being equine in nature. Birim himself offers; “As I learnt the muscular, organ and bone structure of horses in our anatomy classes, I regularly drew sketches”, before adding; “This provided me with a great opportunity to have a sound foundation for my paintings”. Going back to a childhood surrounded by horses, and Birim concurs that thanks to his family owning these magnificent creatures they ultimately proved to be a crucial starting point in his painting career which was to eventually follow. Birim speaks candidly about how he’s always taken much on both an emotional and artistic level simply by observing their joys, affections and passions, at close quarters.

In 1980, and after successfully graduating from veterinary school in his native Turkey, Birim headed to France, and Normandy specifically, where he would enter into an internship during the next chapter of his life. After Birim had acquired all the relevant skills that his chosen veterinary career necessitated once he was out in the field, himself responsible for animal welfare, he returned to Turkey and secured employment with the Turkish Jockey Club. Birim held the role of a field veterinary surgeon for the next 17 years in total, which aside from providing him with a successful and fulfilling career also afforded him an enviable and comprehensive grounding into the psychological and sociological aspect of a horse. These analytical insights gave Birim an otherwise unattainable understanding of a horse’s life, which in turn gave him the perfect platform from which to artistically build a better painted picture of his chosen subject matter too. A sizeable percentage of the initial drawings which Birim created at this juncture went on to form the illustrative cornerstones of many of his future compositions.

Those canvasses starred back then, whilst Birim furthered his professional occupation, went on to become these enlightening, draconian pieces we look out on today, which flaunt boundless and raw energy and an unrivalled sense and feel of power and belonging, through the fluidity of Birim’s painted movements. When he’s crafting the likeness of these wild horses in either oil, acrylic or watercolour, Birim concedes; “I am living their feelings, joys, passions and thrills with them”; which you certainly wouldn’t argue against when confronted with a hallmark Birim offering.

Birim admits to a preference for watercolours, and cites the end result that the easily manipulative medium presents to the artist as being the precursor to championing this material. Describing his individual approach to his art work, Birim insists that he likes to imagine himself galloping with the horses and rearing up with them. essentially taking on an equine form so as to live out the canvas he’s trying to instigate right there before him. Birim talks of capturing their emotions and dreams, as well as their love, friendship and enthusiasm for life, as he creatively tries to envisage the reality of the eventual painting through the eyes of his subject matter. Adding his own perspective on this, Birim says; “Their flying manes in the wind, remind me of how life and time flies by quickly. The harmony of the dust behind my galloping horses, combined together with the colours and shapes of the weather and clouds at different times during the day create very dramatic scenes in my pictures”.

Birim has hosted over 45 solo art exhibitions to date, both in his Turkish homeland and internationally, and has showcased his individual and collective works at at least 15 art fairs. Additionally Birim has been nominated for, and in receipt of, numerous awards and honours in competitive competitions in recent years and is these days commercially represented by one of the UK’s foremost fine art publishing houses, Washington Green, who collaborate with Birim on the production of limited edition prints amongst other successfully mass media forms.