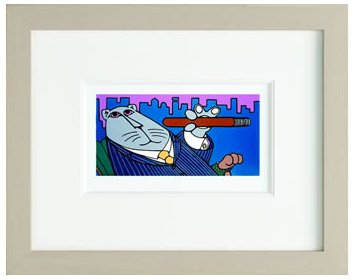 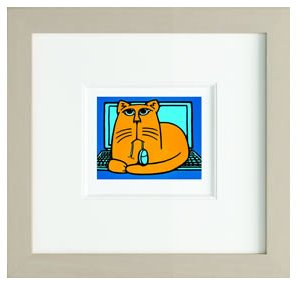 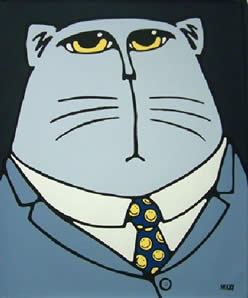 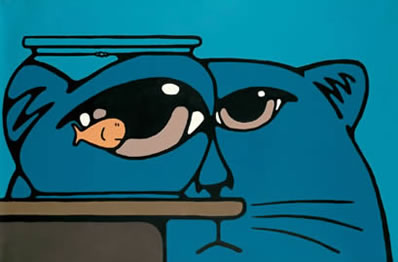 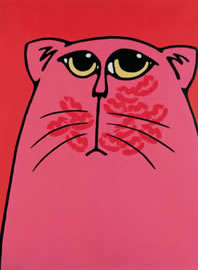 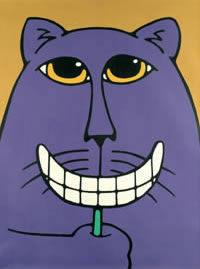 View All Art Works By Bruce Mckay
CATS. Now we’re talking. Just who doesn’t (Facebook) ‘like’ a cat. Tom (aka, Tom & Jerry), Top Cat, Sylvester, Garfield, ‘Scratchy’ (offa of ‘The Simpsons), Stimpy, the Pink Panther. OK, OK, the last one might not technically be a CAT cat, more a big cat, less domesticated, but we’re no David Attenborough. So, you might say, what’s the script with all these cartoon-esque cats, and why the tedious intro to renown contemporary CAT artist, Bruce McKay’s bio. To which we’d reply, because we’re feline good. Sorry. And without further ado……Bruce McKay and his cat art. Not to be confused with the auto and aero artist also called Bruce McKay.

McKay (cat artist one) came into this world via Toronto, Canada and was pretty much drawing from the off. He recalls how as a small child he was obsessed with animals, and his parents were always encouraging him to express himself through his drawings and rudimentary art skills. They must have been very keen on the idea of their son becoming an artist as at the age of 10 they fixed it for McKay to spend time with an artist called Ralph Abrams, who was a forward-thinking, experimental painter, sculptor and animator. In the company of Abrams, an impressionable and eager to please McKay would wile away Saturday afternoons sketching as though his life depended on it, either at Abram’s studio or at the local museum. Even cooler, was the fact that Abram’s arty friends and co-creative types would hang with them in the same building and show McKay how they created their own brand of art too. With all this inspiration at such close quarters it’s no surprise to lean that McKay was destined to be an artist, rather than an astronaut, fireman or NFL player.

Once he hit his teenage years, McKay threw himself into getting accepted at a school of art, which he duly achieved by being invited to attend a special high school of arts located in Toronto, where he studied life drawing, colour theory and art history. McKay was desperate to cover as much artistic ground as possible, and by the time he’d graduated there was no creative stone left unturned. Yet McKay hadn’t settled on a particular artistic style of personal expression, despite dabbling with everything from photo-realistic wildlife in watercolours to aggressively executed abstract oils, whilst the creatively frustrated youth also briefly flirted with the concept of technical illustration. But nothing stuck.

He needn’t have worried, as his future was written in the stars anyway, and on leaving art school McKay rocked up in the advertising industry, which is so often the case with young, aspiring artist types still not entirely sure where they’ll end up. After much hard work and burning the candle at both ends, McKay rose to the challenge of his lifetime and ultimately found himself in a snazzy office space with the title, Creative Director emblazoned on the door. In a building owned by Advertising giants, Saatchi & Saatchi, Canada no less. All on the back of some 250 local, national and international creative awards he scooped on his employer’s behalf according to legend.

The flip side of all this success and corporate back-slapping was of course excessive tiredness and lethargy, resulting in a non-existent social life and no time whatsoever to express himself through his art during uber rare downtime. So a dramatic change was sought by McKay, and he bit the bullet and decided to fly solo.

Quitting whilst at the top of his game, McKay returned to the easel full-time and eventually constructed his own website promoting his (predominantly cat based) compositional wares to world-wide people. Acting as a sort of virtual global gallery for art (and cat) lovers across the planet to drop in on and browse. It’s called ‘bigcatheads.com’ and it’s pretty ace to be honest. Although don’t check it out just yet, as we haven’t finished here. It wasn’t long before McKay was receiving massive support for his work and building a loyal following, fan base and enviable reputation for the originating and manifesting of a whole lot of (cat) paintings. The contemporary art loving citizens of Tokyo, London and Rio would drop by at any one time according to McKay’s web analytics (or comments page), with South Americans being particularly chuffed with what they witnessed, compositionally. McKay’s website was also where the UK’s leading art publishers first discovered McKay’s work too, which kick-started their fruitful relationship which continues to go from strength to strength and affording McKay extensive expose here in Great Britain.

So, the question on all of our lips (probably), why cats? Well apparently McKay started painting cats after adopting a kitten called Maxine, who became the inspiration behind his ‘Bigcatheads’ series. Discarding the detail-led visual persona indicative of realism, McKay instead turned to a simpler, looser style, with the linework evolving into iconic shapes as he likes to refer to them as. The abstract element as such permeated from the whimsical approach seen in cartooning. Above and beyond this? As McKay says, he just loves cats, and adores everything about them. Fair enough. McKay considers cats as being a reflection of himself – quiet, reserved, mysterious and easily embarrassed – and insists that when he stares into a cat’s eyes (actual cat’s eyes, not those reflectors found cemented into roads) McKay sees a deep consciousness. Something which isn’t quite recognisable as human, and a little bit twisted he reckons, yet he senses wheels whirring inside its bonce. So as to quickly justify himself, McKay adds that fellow cat owners/lovers will know exactly what he means, whilst the rest of us will just have to take his word for it. McKay points out; “The real magic is in the cat’s reaction to ‘the moment’. Cats have a profound range of expressions, but they’re so subtle, they're virtually invisible. Have you ever seen a cat smile? They can you know. They smile with their eyes”.

McKay stresses that his compositions are simple, balanced ones that follow few rules of pictorial engagement and maintain an unswerving dedication to conveying one aspect and one aspect alone. Indeed, McKay’s mantra is one moment, one message, one gag, one prop, one colour and on occasion, merely the one shape. Simplicity first, second and last. Oh, and no sharp edges, as McKay insists that details live in corners. Suffice to say McKay adheres to this code of illustrative conduct with steely determination, completely un-flickering as his black outlines flow back and forth around saturated pools of colour, creating this liquid line effect as a by-product. He cites his influences as Norval Morrisseau, Lawren Harris and George Rodrigue with a little Keith Haring sprinkled on top, and it’s clear to see that there’s hints of all four across McKay’s portfolio.

Providing that his paintings are billed as big, bright and fun, McKay’s happy at the end of the day, as he describes his default setting as one of eternal optimism, and chooses to view the world around him not only through rose-tinted spectacles, but with a dry sense of humour at close hand. It’s these core qualities that he hopes are both interpreted and projected through his work and which have the visual ordacity and sheer front to enlighten a room or wall space from which they hang. If that’s the case, then job done for the cat man.