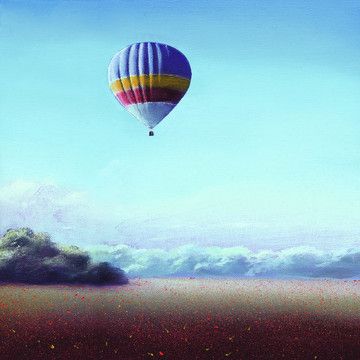 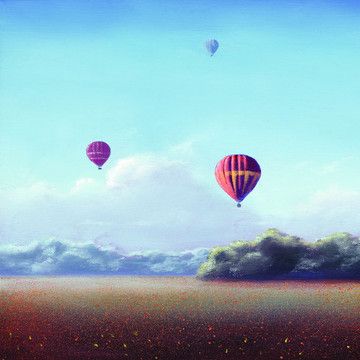 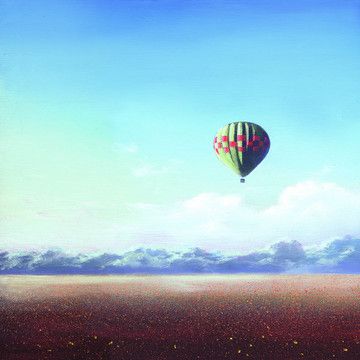 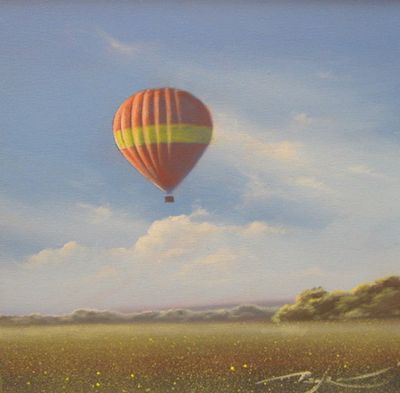 View All Art Works By Ben Payne
Skies tend to dominate contemporary landscape artist, Ben Payne’s hallmark compositions, which is no bad thing, especially when they’re as fulsomely spectacular as he depicts them by force of habit. Although there’s a liberal smattering of beaches and sea too on closer scrutiny. Payne evidentially appreciates the sky above our heads – or rather the one discovered above his when he’s painting – and its sheer presence is pictorially manifest in a large part of his body of work to date. When Payne does place figures or objects within the canvas, they’re habitually pitched in the middle distance and remain minimal, doing nothing to detract from the towering majesty of that azure blue heaven.

Billed, justifiably so, as a major, emerging British talent in the contemporary art world, Payne has forged an enviable reputation for the originating of what critics consider to be fresh, uplifting and above all else, escapist compositions, and is being mooted as ‘one to watch’ going forward. Born in 1975 in Surrey, England, Payne showed a healthy appetite for drawing and painting from a young age; not to mention a fledgling talent witnessed by his nearest and dearest. Payne displayed an uncanny knack for drawing the likeness of people, and his portraits really took shape during his adolescent years. So much so, that by the age of 16 he was already selling his art, which is no mean feat. Pretty much entirely self-taught, Payne loves a creative challenge and throws himself into every new artistic venture, and the finished results are universally agreed to be both highly accessible works yet technically accomplished for someone who didn’t benefit from any recognized, formal training as such.

Payne went on to gain a degree from Southampton University, yet this had precisely nothing whatsoever to do with art, bizarrely. Graduating in Psychology he took up a career as an independent therapist, specialising in the field of autism, and working with young children in particular. Having said that, Payne maintained his interest in his painting when time allowed outside of his chosen career, as well as educating himself within the context of art and extending his material knowledge and skillset to cover oils. There’s no doubting that Payne’s daily interactions with youngsters whose communicative attributes are compromised has affected his own particular brand of art, as he moved away from his early portrait preferences and instead focussed his compositional efforts on landscapes. Never more so than with reference to Payne’s adept brushwork that depicts scenes and vistas in such simplistic, yet bold and vivacious fashion, possessing this almost child-like way in which he intonates and applies vast swathes of colouration and the actually juxtaposing of the core criteria of the canvas.

Payne is the first to acknowledge that his work with the children has taught him to value simplicity and a pureness of objectivity, which has spilled over to his paintings, and more than anything else to communicate in a very direct and universally accessible design language, rather than labouring the point with overly elaborate visual overkill as is often the case with some contemporary artists. Whilst Payne’s canvases are unequivocally powerful and evocative, they do harness and project certain innocence, rather than a naivety, which it’s fair to say sets them apart from his peers. What’s more, despite Payne’s subject matter resolutely realistic and erstwhile in form and functionality, there’s an underlined dreamlike ambience to them, resulting in this unique and innovative fusion – intended or otherwise – of enchantment and sophistication, seldom linked and witnessed within the confines of a singular frame.

In terms of Payne’s inspiration, we’re told that the signature works of Turner and Whistler are found at the core of his artistic beliefs and subconscious temperament, and it’s clear when you look upon Payne’s visual descriptions of clouds, there’s more than a subtle nod and wink to both aforementioned and famous artists. That implied delicacy in the approximation of Payne’s clouds, yet never at the cost of an otherwise vibrant and dramatic palette, which when all is said and done affords Payne’s studies a truly ethereal character. Most recently, and as something of a departure from his more familiar beaches, beach huts, shorelines, tidelines, fleeting glimpses of people and boats, Payne has created a collection of inspiring land-based compositions, which celebrate and capture hot air balloons ascending and descending over gloriously illustrated fields, adding yet another string to Payne’s extensive existing bow.