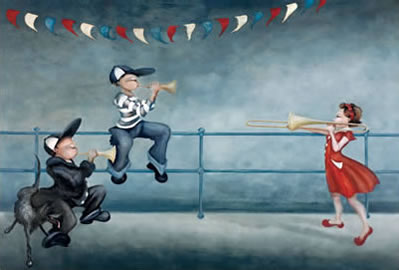 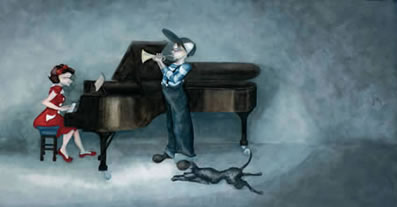 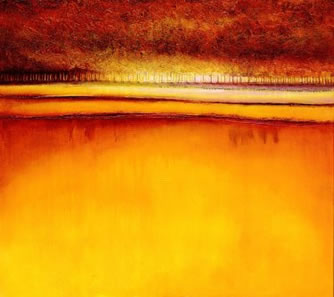 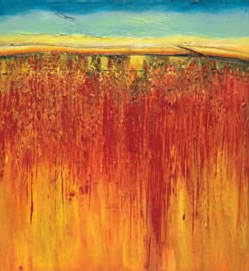 View All Art Works By Lynn Poland
Popular contemporary landscape artist, Lynn Poland has two further strings to her creative bow, those of still life painting and the capturing of musicians. Yet that’s just in the two dimensional creative locker, as the productive Poland has recently ventured into the field of art sculpture too. Jugs mainly, and assorted pots and pans from the pantheons of history, presented on wooden plinths, and therefore not only representing a complete departure from her trademark flat surfaced work to relative date, but also Poland’s tried, tested and hugely successful illustrative subject matter.

Concentrating on Poland’s passion for landscapes, and it’s fair to say that she’s drawn to areas of open countryside or shorelines as has been pictorially testified through both her individual works and collections from pretty much the outset. Speaking about this enduring fascination with all things rural and coastal, Poland says; “The simplicity of ribbons of land and sky divided by hedges and roads that appear as visual scars across the landscape provide the structure for my paintings,” going on to add, “Working in the landscape gives a tremendous sense of freedom and the opportunity to use dramatic colour and varying textures”.

Although landscapes weren’t necessarily Poland’s first artistic inspiration, as at the beginning of her professional artistic career she was in fact a respected portrait painter, which is a disciple she’s revisited lately quite by accident rather than design. Poland considers her ‘musician ‘ painting to be something of a timely antidote to more serious concerns which afford the versatile artist’s imagination wings, and which were reawaken as it were from a recent trip to Barcelona. Sketching the likeness of a series of street buskers whilst on holiday, Poland developed these small drawings, ultimately transforming them into more prominent and conventionally sizeable pictorial numbers; which inadvertently served as a pleasant trip down memory lane in terms of Poland reacquainting herself with figurative work.

Retracing her formative years, and rewinding a little further back from her first taste of life as a professional artist working in any specific genre, and Poland recalls a childhood where she’d quite simply lose whole days drawing and painting in her room at the family home in Manchester, essentially left to her own devices. Leaving secondary education at the first opportunity, Poland enrolled on a 2-year Art Foundation course, which she combined with A-levels, all of which were purely art-based. Poland describes a blissful time, where she immersed herself in her beloved subjects, which were made all the more interesting and well-informed as most of the lecturers were practising artists at the time of her further educational stint.

On leaving this idyllic surround, Poland landed a job as a trainee printmaker in Manchester in 1982, where she stayed and served her apprenticeship in until 1985. Poland explains that the mainstay of her artistic work at this time was of figurative direction and value, heightened by the achievements enjoyed in her final year at college when she shad two pieces of her art showcased at the Whitworth Young Contemporaries Exhibition, held in the Northern industrial city. This success in itself had afforded Poland contacts within the art industry and had also resulted in receiving several commissions for portraits which boosted her confidence before entering the profession.

In the mid-1980s Poland decided to tutor in art for a while, passing on her own knowledge and skillset in the areas of painting, drawing and printmaking, before taking time out to have her daughter in 1987. When the time came, Poland kick-started her career in education, by formally training to become a teacher, going on to spend the following 12 years combining her blossoming teaching career with her main passion in life, her painting. Poland never lost sight of her own artistic directions, nor ceased to be motivated to devote so much of her spare time to the pursuit of it, and that was in part to those around her. As it happened Poland worked alongside fellow budding artists, who would regularly create their own pieces outside of their 9 – 5 commitments. As Poland puts it herself; “This has been a vital aspect of my development as a practitioner. Sharing ideas and practical knowledge with other artists is invaluable,” while adding; “I believe that in art, education never stops. There is always more to learn”.

Life has come full circle for Poland though nowadays as she forges ahead with her dedicated painting career in a full-time and professional capacity, having closed the door, finally on her teaching career. She had grown increasingly frustrated at not being able to free up the necessary amount of spare time she believed that she needed to fulfil her underlying and personal creative desires, and in the end arrived at the conclusion that something had to give. Fortunately the risk paid off and within a short space of time Poland was exhibiting and eventually selling her art through a selection of galleries and outlets, and her popularity as a bona fida artist is growing rapidly.