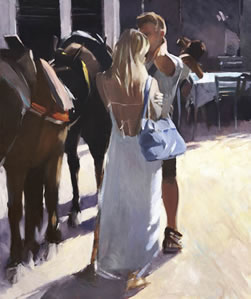 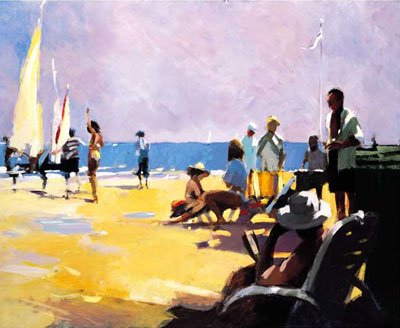 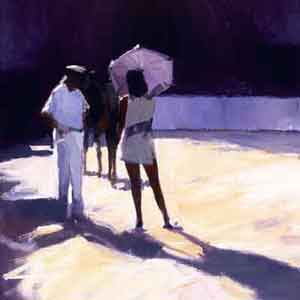 View All Art Works By David Farrant
If you’re in the market for gorgeous, invitingly intoxicating paintings of seductive, powerful, typically leggy women looking wistfully, yet purposefully out into the middle distance - like a Grattan catalogue model only with markedly more finesse and panache - then you’ve arrived at the right contemporary figurative artist destination. Add a generic coastal, bar or café scene to that illustrative wish list and today is indeed your lucky day, as we run the artist profile rule over Mr David Farrant Esq. the acclaimed contemporary figurative/fine artist with a decided knack for knocking out decadent, inspiring compositions which paint his predominantly, alluringly female subject matters in provocative yet never suggestive poses. As far removed from Hugh Hefner’s publications as humanly/illustratively possible, Farrant’s gregarious, enigmatic works of art appeal far and wide, and are available through a selection of UK art galleries here and now.

Born in London in 1938, Farrant studied art at where else, but the fabled school of design attended by so many art dignitaries and household names over the years, Central St Martins. A hotbed of artistic talent like no other in the Britain. On graduating from St Martins, Farrant establishing himself as a hugely popular and somewhat prolific contemporary artist, underlined by inclusion of a cross-section of his back catalogue of art at various exhibitions over the years. Not least, the revered likes of London’s National Portrait Gallery and the Mall Gallery showcasing his signature pieces, in his guise as member of the Royal Society of Portrait Painters. Suffice to say that Farrant is acknowledged as one on the country’s finest portrait painters.

However in the early days, Farrant forged his career being a teacher of art rather than an out-and-out practitioner, although he did try to divide his time between the two. The portraiture element fell by the wayside eventually, as instead Farrant looked to his penchant for the more figurative aspect of his art, and habitually favours oils and acrylics in terms of mediums. Farrant also chooses to compose his visually resplendent masterpieces on a fairly large scale it’s noted, with more than a view to his paintings imposing a 'presence' in the domestic environment, whilst Farrant also does his level best to suggest a pictorial narrative to his each and every study. Inspiration is said to be drawn from the observing of people in their everyday situations, and a recurring theme in Farrant’s hallmark canvases are his steadfast illustrative hat-tilting to the presence and nurtured impact of light, especially the more naturally sourced variety; with sun playing a pivotal role time after time.

Subtly influenced by such artistic luminaries as Hopper and Vettriano, Farrant’s encapsulation of human endeavours and interactions proffer seemingly peerless observational attributes, committed to the surface area courtesy of somewhat muted hues and saturations and the investment of complex shadows. When discussing his impeccably weighted and artistically hewn paintings, Farrant insists: “I like to think my paintings work on two levels - firstly, and in a formal sense, as compositions in which strong tonal contrast, accents of colour and simplification of form are key elements” going on to add; “Secondly, and in a narrative sense, I hope they carry a mood and the possibility of an unfinished story which the viewer can share”.

Now residing and working in the picturesque corner of England geographically referred to as East Devon, Farrant still strikes a successful balance between completing his steady flow of portrait/figurative commissions and tutoring art students at a local art college in the area, whilst his work is housed in private collections across the globe.