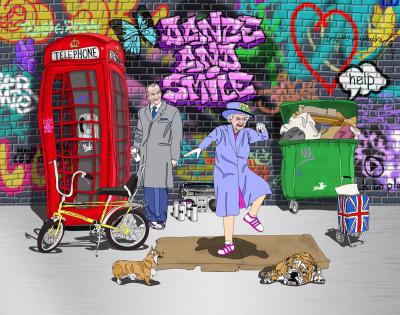 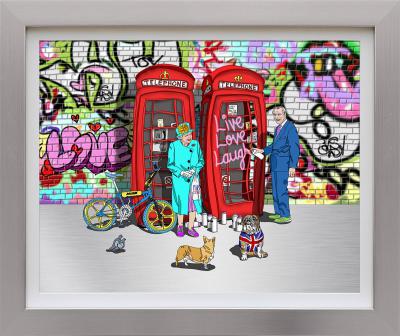 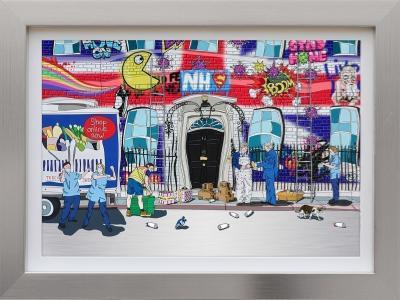 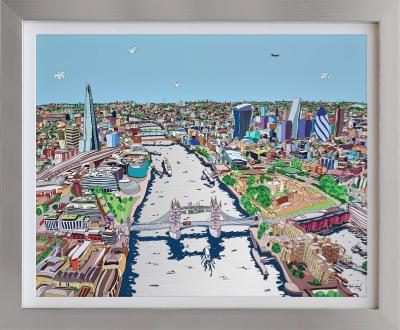 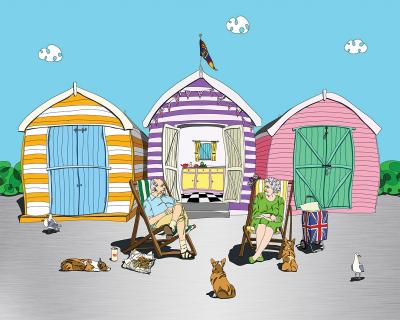 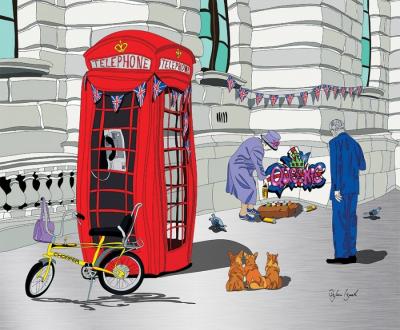 View All Art Works By Dylan Izaak
Critically acclaimed contemporary cityscape artist, Dylan REALLY goes to illustrative town on his typically larger (and wobblier) than life compositions, as viewed hereabouts. His famed wibbly-wobbly buildings and iconic landmarks, visually executed in the most flat primary colours you have ever imagined are simply awesome at the best of graphical times. From the jelly-licious Chrysler Building to the bouncy castle-tastic Statue of Liberty, every canvas inch is unapologetically rubbery jubbily across his impressive back catalogue of famous landmark-etched canvases.
Amongst our personal favourites is Izaak’s recent illustrative reveal available here, entitled ‘New York Times’. Go check it out and see for yourself. Frank Sinatra famously sang about it, as did Alicia Keys and Jay-Zed latterly (The city that supposedly never needs to set its alarm clock as it never sleeps, YEAH?). New York, New York. A place so important that they named it twice. The city where dreams come true. A gridwork of horizontally and vertically-opposing streets, both upper and lower, east side and west side. Home to some of the planet’s most instantly recognizable and iconic pieces of architecture; The Empire State Building, The Chrysler Building, The Statue of Liberty to name but three in Izaak’s towering, perspective-skewed composition. And that’s just one of them.

But let’s not get too carried away, and instead take a casual ganders at the who, where, when, what, which and why with regards to Izaak. It all started back in 1971 in a place called Rugby, which aside from a popular contact sport here in Britain, is also a place on the county fringes of Warwickshire, found in the sort-of south east Midlands. Which was where Izaak was born. Since his birth, Izaak has collated a sizeable amount of Air Miles (more than enough to purchase a camera we would have thought), having relocating from Rugby to Coventry to Australia to Stratford-upon-Avon to Australia and a return to Stratford-upon-Avon in the time it’s taken him to become an established urban landscape artist of note. What’s more, we also learn that he moved on a number of occasions within each of these locations.

In terms of actually becoming an artist type, Izaak first started earning a crust in the notoriously hard-to-break-into profession in the guise of a street artist, which he practised and perfected over a period of some 9 years. Realising that he needed to gain a more secure home for his particular brand of art, Izaak opened a gallery. Unfortunately, and due to the unique way in which Izaak wasn’t funded at the time, he couldn’t opt for the more traditional bricks and mortar approach to gallery ownership. Alas, that didn’t stop Izaak achieving his dream, as he alternatively opened his gallery on a narrow boat. As you do. He insists that working out of a floating gallery meant he could display ALL of his work, as opposed to just a more considered, yet restricted selection that might not have possibly appealed to his entire envisaged audience. Such as Izaak’s proudly presented ‘Long People’ and ‘Wonky Buildings’ mini-series/concepts; which he harboured high hopes for.

This proved to be the – pardon the water-based punnery – a spring board/launch pad for future successes for Izaak, as after grafting away tirelessly for the next 12 months or so on a (commercially-targeted) breakthrough collection, Izaak steadily began to appear on the radar of other, established and influential galleries, which subsequently afforded his work a deal more exposure. And suddenly, although not quite overnight, there seemed to be a lot more demand for Izaak’s art work. This response/interest has doubled, trebled and quadrupled year on year, helped and encouraged by getting DeMontford Fine Art on board (again, please overlook any ill-advised puns), who, as anyone who’s got their ‘art on’ knows only too well are one of the UK’s leading fine art publishers who ensure that their stable of artist’s get their work out there in all the right places. Courtesy of production of a lot of limited edition prints and such mass media appeal-like.

And then of course came 2012. A year which put Izaak and his work firmly on the illustrious illustrative map, if it wasn’t already there and welcomed a whole, vast new audience to his creative fray, thanks to the London Olympics and his involvement. Not with a javelin, more with his now-bespoke and hugely popular art, having been approached to become one of the official BT Olympic Artists no less. Away from all the razzamatazz – and easel – Izaak is your typical modern man, with a fondness for beers, cars, people and pigs, and is a family man who, on his own words doesn’t need TV in his life. Izaak; “I don’t like watching too much telly”. He also, apparently, doesn’t care for horses much either and is strangely allergic to penguins, whilst he readily dedicates a lot of his spare time to thinking how he’d spend his fortune should he ever scoop the lottery. Which as he insists himself, isn’t necessarily the materialistic stance you’re programmed to take if you have artistic leanings/persuasions. Still, as you can clearly see/read, Izaak is no ordinary artist. Thankfully.