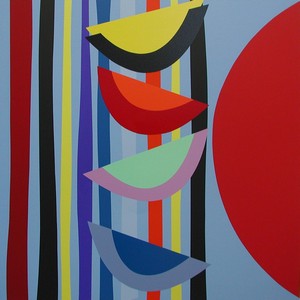 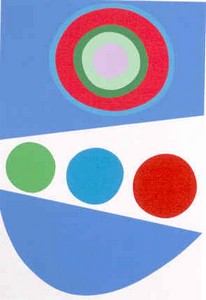 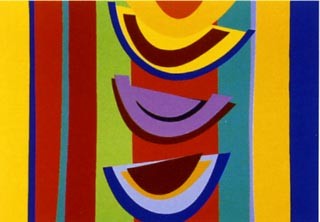 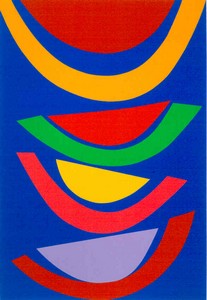 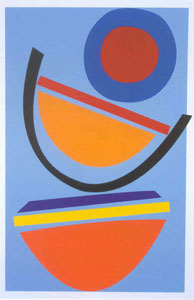 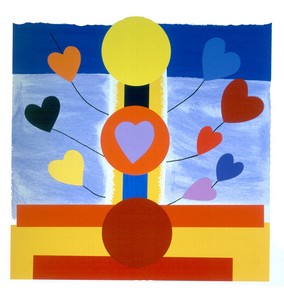 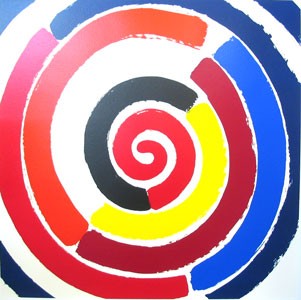 View All Art Works By Terry Frost
Born in Leamington Spa, Warwickshire, on the 13th of October 1915, Terry Frost excelled through his school life but upon finishing school in 1930, took up a job in a cycle shop, followed by many other jobs in the nearby area. As the forties rolled around, he was called up as a member of the Army Reserve to Palestine and, then France, before transferring to the Commandos to serve in the Middle East.

Unluckily, Frost was captured and became a prisoner of war in Crete until April 1945. Upon his exit from holding he met Adrian Heath who taught him how to draw and paint, later on that year his first solo exhibition was held in his home town while he still served in the armed forces. As the year ended he was released from service and returned to work in Birmingham, marrying his wife Kathleen Clark in August as he continued to practice his painting at art classes during the evenings. Drawing inspiration from his mentor Heath, he resigned from his job and moved to Cornwall, studying art at Leonard Fuller's St Ives School of Painting in 1946. During the following year he moved on to study at the Camberwell School of Arts and Crafts. Another year passed and he began to return each and every summer to St Ives to work at the Sunset Bar and to paint and exhibit with the St Ives Society of Artists. Finally as the forties ended, he continued to study pottery and lithography unofficially at Camberwell even after being awarded an NDD.

Returning to live in St Ives and taking out a studio near fellow artist Ben Nicholson, Frost began to exhibit and work part-time for artist Peter Lanyon at Robin Nance's in 1950. The following year he began to study at an Intermediate level at Penzance School of Art before being elected as a member of the Penwith Society, this year also saw him exhibit at the ICA in London for the first time. As another year passed he began teaching Life Drawing and Anatomy at the Bath
Academy of Art and the Willesden School of Art in Corsham and London, all respectively. Whilst teaching a range of other classes in many colleges and universities across the country, Frost continued to push his stills further and in 1959, world famous London-based gallery The Tate purchased their first work by him. It was during this time he also made his first visit to Paris, France.

In the early sixties, Frost made his first visit to the United States, spending three weeks of this time in New York visiting several studios. After a few years he decided to move to Banbury in 1963 and began teaching at the Coventry School of Art. He additionally began teaching in Reading University two years later and began teaching in San José, California, during the summers. From here on out he began teaching in many academic institutions internationally, from the Voss Summer School, Norway in 1967 to Banff, Canada in 1975 to Nicosia, Cyprus in 1977. His astounding academic career earned him a position as a Reader in Fine Art at Reading University before being promoted to Professor of Painting in 1977. He finished the 1970s with his academic work, teaching at the Summer Academy in Umea, Sweden, in 1980.

As the eighties began, Frost retired from Reading University, being made a Professor Emeritus. Upon retiration he visited Russia for the first time and was astonished at the work of Matisse and Kandinsky. Spending much of his free time now painting, for the next ten years he continued to push his artwork further into areas never imagined before. In 1992 his skills were recognized again as he was elected as a Royal Academician before being Knighted in 1998. Terry Frost passed away in 2003 on the 1st of September. During his lifetime, Frost exhibited across the world in a variety of museums, galleries and institutions but never forgot his academic roots as he taught and inspired those he lectured to start their own careers in the art world.