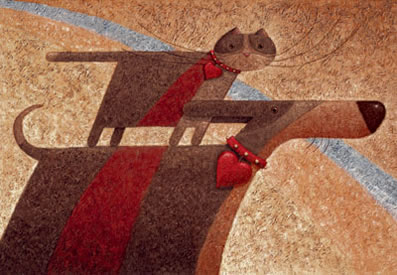 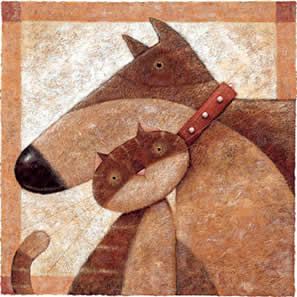 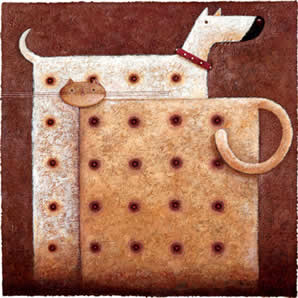 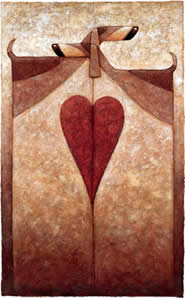 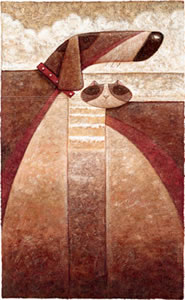 View All Art Works By Peter Adderley
Celebrated contemporary abstract landscape and animal artist, Peter Adderley’s compositions are like a breath of fresh air blowing in and removing the cobwebs gathered by so-so art from the same genre. Adderley’s larger than life studies of all things nostalgic and/or animagnetic are uplifting, soulful visual numbers which resonate with many a contemporary art fan who like their illustrations served up with a wealth of colour, warmth, familiarity and that good old fashioned sense of belonging. From harbours steeped in fishermen’s tales, tall as the lighthouse guarding the community to man’s best friend striking an indifferent pose with feline friends and foes, Adderley’s graphic snapshots of a much genteel-er time and place effortlessly capture the moods where many of us would like to find ourselves more often. Although primarily a canvas-based two dimensional artist, Adderley has been known to dabble on more than the one occasion with 3D versions of some of his animal characters, which in the eyes of his legions of fans (and anybody with a semblance of taste) is definitely no bad thing.

Born and bred in deepest, ruralist Staffordshire, Adderley’s art education took in two local establishments, once he’d completed the formalities of his secondary education. Namely the North Staffordshire Polytechnic, where he studied for his Art Foundation course, followed in turn by a stint at Wolverhampton Polytechnic, where he came away with a shiny degree for his higher art education troubles. With his new qualifications under his belt, and armed with a power of enthusiasm and motivation Adderley opted to launch his artistic career as a freelancer, and under the versatile guise of an artist and card designer. This he did with measured successes up until 1990, when he came to the decision to dedicate his full creative-self to painting henceforth. Again, experiencing enough success to confirm that he’d made the right decision, Adderley carved out his career as a professional artist over the next few years, before he really made the dramatic impact that would eventually announce his arrival on the contemporary art scene with style.

That was in 2004, when Adderley scooped a place in the final of one of the UK’s largest fine art publisher’s competition which was searching out fresh talent. Cementing his position as a winning finalist in DeMontford’s New Artist Competition that year, Adderley’s prize was a publishing contract with the company, who were renowned for gaining their portfolio of artists the maximum amount of exposure in the art-loving public’s eye. this unforeseen collaboration paid dividends for both parties from the off, as DeMontford represented Adderley’s (then) work in the mass media arena, serving his interests best by producing a selection of limited edition prints of Adderley’s original pieces and ensuring that they were circulated through their enviable network of art galleries throughout Britain at the time.
That was then of course, and now nearly a decade on Adderley makes a fulfilling and lucrative living from his contemporary art at his new home in North Devon. Having relocated to this tranquil and creatively ever-expansive part of South West England, Adderley works out of his own home-based studio environment, and clearly finds living so close to the sea a seemingly infinite source of artistic inspiration.

Substantiated by taking a look at any of his signature pieces which as we mentioned above are typically jam-packed with his hallmark quirky characters and plenty of coastal reference points. The recurrent voice which best describes Adderley’s particular style of art is one that speaks volumes about its ‘sophistication’, yet its simultaneous levels of ‘whimsy’ too. A balancing act which is seldom easy to carry off to such effect as Adderley manages to.

Habitually choosing to lend his painted, watercolour papered canvases a bold acrylic look and material feel, Adderley’s palette is perhaps best characterised by soft, thoughtful browns, mochas, creams and golds, only really interspersed by the occasional and equally considered introducing of splashes of red or burnt sienna which ultimately afford the compositions a more complete focus. In terms of Adderley’s inspirations away from his ready easel, it’s clear to see that he’s a man of music too; citing the revered likes of Ella Fitzgerald, Louis Armstrong and Courtney Pine chief amongst his alternatively creative jazz influences. But then not really that much of a surprise given that like Adderley’s trademark visual work, all of these consummate performers are compelling, virtuosic, deceptively simple, and delightfully accessible.