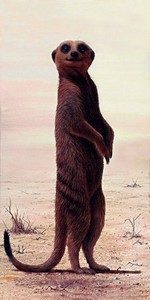 View All Art Works By Jonathan Truss
We’d hazard a guess that there’s not many artists who’d dive into the ocean (albeit in a cage) to sketch the likeness of a school of killer sharks. Now, THAT’S commitment to the artistic cause. But then celebrated contemporary wildlife artist and photographer, Jonathan Truss has always gone above and beyond the call of creative duty to portray some of the planet’s most exotic, beautiful, rarely spotted, endangered or just plain dangerous creatures. This guy regularly out Rolf Harris’ Rolf Harris. And then some. He’s like the late, great Steve Irwin, only armed with a camera or sketch pad as opposed to a pair of shorts and a strong Australian twang.

Truss has been fascinated and positively in awe of wildlife and very wildlife, for as long as he can recall, suggesting it was forged during his early career as a professional musician and actor, both of which took him to far-flung destinations which naturally exposed him to much more than the domestic cat and dog. Oil painting is Truss’ thing, and he’s been the subject of numerous international exhibitions, whilst those very same compositions have been sold to private and corporate/serious collectors across the globe. Literally, Truss’ work fills wall space from New York to New Zealand and from Botswana to Beverly Hills.

Truss’ gallivanting in the name of his art has led to travails to just about the four corners of the world, although historically the African continent has become a favourite creative haunt over the years for Truss, and in his perpetual search for more and more pictorial reference points he’s no stranger to sleeping under the stars in the middle of game parks in Botswana, Kenya, Tanzania and Zambia to name but four countries that he’s frequented. Indeed, Truss’ epic globe-trotting (and rich seam of material he’s brought back to picture) has helped establish him as one of the UK's leading wildlife artists and is rapidly gaining even greater column inches on the remaining four continents for his artistic endeavours/exploits.

Just to afford you a flavour of just how in demand Truss and his work is, read on. Currently published by leading UK art publishing house, DeMontford, Truss has had work sell out on publications and new releases are often oversubscribed before they even become available to purchase, such is the artist’s popularity and broad appeal. In 2011 Truss was commissioned to pen a new book title, ‘A Master class in painting & Drawing Animals’ which was subsequently published and released for sale by the Britain’s largest independent publisher, while he’s appeared on TV on over 100 occasions and has featured prominently in countless national and international glossy periodicals to date.

As if he wasn’t busy enough, Truss has also collated even more Air Miles by venturing back into his oft-hostile (art) hunting grounds with groups of painting-hungry people, signed up to his popular art safaris, which over the course of the last few years have taken in trips to Kenya, The Galapagos Islands, India, BC Canada, and Madagascar. All the time, Truss is an ardent and active supporter and ambassador for conservation in these crucial areas in which he travels to paint, and feels equally passionate about the various creatures’ survival and long term plans for their futures as species, predominantly championing this through his high profile membership of the US organization 'Artists for Conservation'.

Truss is perhaps best known for his stunning and universally reproduced depiction of a resting, yet ever alert tiger in the best-selling, ‘Siberian Siesta’, while he habitually goes that extra mile to afford us the best shots and/or oil paintings. Seriously, this guy routinely suffers for his art, not least during one of his most recent expeditions into Africa, this time on the trail of a herd of elephants. Truss’ three week art-prescribed pilgrimage resulted in him wading, waist deep through water to determine the best angles and creative perspectives, only he emerged from his watery viewpoint complete with leeches attached to various parts of his anatomy. But of course, in his own inimitable style, Truss countered; “But the shot I got was great”. Well, that’s alright then.

But that’s precisely the never say die attitude of Truss that has gained him this enviable reputation for delivering the art goods time after time. There’s a pig-headedness about Truss the artist. Take for example the time he wanted a picture of baby elephants playing in water. In the acclaimed artist’s own words; “After days of waiting, we heard of a 10 month old baby 30km away. When we turned up, it came running up to me,” he recalls. Another time, in Botswana, Truss wanted a picture of elephants at water. Despite the existence of 80,000 elephants, he had to wait for three hours for the moment that inspired ‘Botswana Bulls’.

In terms of his art work, Truss succeeds in bringing the unique colours and sounds of Botswana and Zimbabwe to life on canvas. In "Water Babies", he captures the playfulness of the elephants, and in his most famous image, "Siberian Siesta", Truss creates a tension between onlooker and subject with his skilful composition. Through the eyes of the beast - part interrogative, part imploring - Truss relates the complexities of our position and that of the tiger. As you look, you feel both watched and the watcher at the same time.

Today Truss can be found holed up in his purpose-built studio, when he’s not being the intrepid explorer-cum-wildlife artist extraordinaire, and while admittedly being physically isolated he's definitely no stranger to the views of others. Truss concludes by stressing; “There's a lot of snobbery about wildlife painting being just illustration, but it's my imagination that makes a painting,” adding; “I try to make the light and the composition of the landscape interesting, but other than that, I am not too literal. After all, if people want a photograph, why don't they buy one?”