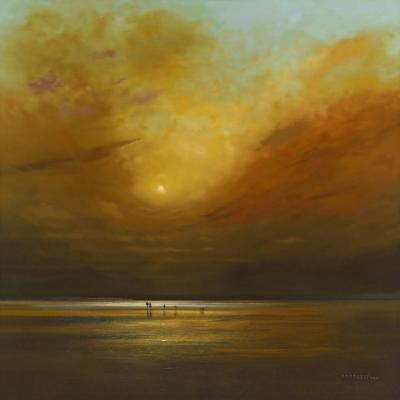 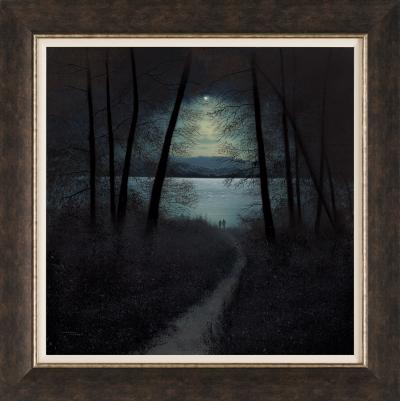 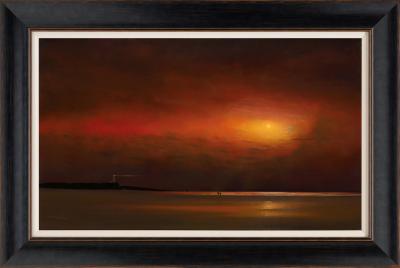 View All Art Works By Lawrence Coulson
The Coulson family home was full of art during Lawrence Coulson’s childhood; larger than life, evocative, towering illustrative masterpieces from most notably the one, critically received landscape and aviation artist of his day. That was Coulson’s father of course, Gerald. Acknowledged as one of the UK’s most prominent artists in the aforementioned genres (and at the height of his successes) whilst Coulson Jnr was growing up, Gerald obviously influenced his young son through his own, hugely popular brand(s) of art during his formative years. However Coulson Jnr’s subject matter and materials used were significantly different from those championed by his established father. As opposed to landscapes and aviation pieces manifest in oils, Coulson’s focused on cars and were visually brought to life by the advent of pencil crayons for the most part. Recalling his youth and his earliest relationship memories with his father and art, Coulson admits that as a young child he thought all dads did the same. The same being locked away in a spare bedroom beavering away with paints, only to then fill the house with wet oil painting, propped up against walls to dry naturally.

During his school years Coulson continued his obsession with drawing the likeness of cars and his favourite models of the day in particular, whilst his father always encouraged him to do so and further develop his fledgling – and it has to be said, inherent – talent for art. Coulson remembers all he ever dreamed of becoming during his formative years was a car designer, an occupation to this very day he admits he would have loved to pursue. But then, his ‘alternative’ career didn’t pan out too badly in the end, as since turning professional on Independence Day 1997, Coulson has achieved immeasurable success with his vivacious and luminous landscapes, which while following in his father artistic footsteps in one genre sense, are a million miles away in terms of visual tone and diction.

But then, despite his obvious gift, Coulson may never have become a bona fida professional artist in any capacity at the end of the day, had it not for his father pestering him behind the scenes, coupled with a love for art which he kept returning to when opportunity presented itself. And that’s because Coulson never even made it to Art College or university in the end, on account of him not having acquired the necessary grades to do so. In the event Coulson scrapped a Grade D for his Art at school, and rather than re-sitting his exams he opted to instead enter the world of employment. In his case, in the retail industry. Working his way up to become a sales and marketing manager and latterly, a manager with a broader remit, Coulson kept his (art) hand in behind the vocational scenes.

Confirming that he never really excelled in art at school, Coulson left education at 16 to embark on said career path, yet at 21 his father encouraged him to look at his art once again, only this time to ignore the pencils and look to oil paints as an alternative medium in which to express himself and convey his own creative direction. Coulson’s father handed down some pointers with regards to technique, which colours to frequent and the importance of tonal values to the composition. Encouraged and seemingly motivated by the results of his first attempts at painting (which would happen away from work during his spare time), he managed to secure some wall space in a local pub to determine if any of the pieces he’d completed would be of interest to anyone. Which they did, at £30 a pop for those first Coulson Jnr numbers. Selling a few in this haphazard and seemingly impromptu manner gave Coulson the confidence to approach a local art gallery to determine whether or not they might want to showcase his work. Seeing the potential in Coulson’s work they agreed to this and so started a mutual rewarding relationship that lasted until the mid-1990s.

All the time Coulson was continuing to forge his retail management career as he built up a decent portfolio of contemporary landscapes with a long-term dream of one day being in the fortunate position of being able to solely paint for a living. In time – and through a friend – Coulson was offered the chance to display some of his (then) works in a local restaurant, where again he found his art in demand, selling pieces on a regular basis. Having previously met Paul Green and Glyn Washington (from the UK’s leading art publishers, Washington Green) through his father, whom they represented commercially for a number of years, Coulson arranged for a piece of his work to be on show when Paul Green next visited his father’s studio. At the same time Coulson put on a one-night only exhibition at the restaurant and invited Green to attend.

Thankfully Green took up his invite and on witnessing Coulson’s work, purchased most of what he saw on sight, and there and then striking up a working relationship with the younger Coulson. Over the following months he worked day and night (around his full-time occupation) to maintain the demand for his art work, which eventually began to take its toll on Coulson as you might imagine. Inevitably he couldn’t keep up these 24 hour working days and something had to give. Although Coulson himself had a young family to support, on the 4th July 1997 he handed in his notice and declared himself a professional artist.

In no time at all the quality of Coulson’s work improved further, and on the back of a collection of successful showings at the Halcyon Gallery, Washington Green put the wheels of a publishing plan in motion which has ultimately seen Coulson’s contemporary landscapes meet with universal approval and acclaim from both fans and collectors across the globe. Much as his father’s art had before him.

Primarily based on a very English landscape, Coulson has experimented on occasion with other genres, yet has always returned to the visual provision of graphically uplifting landscapes; the area which excites and motivates him above all else. Coulson’s compositional objective on most occasions is to muster and recreate that anticipatory sense that fills the air preceding a thunderstorm or another adverse weather condition perhaps. Or maybe that unique atmosphere of being the first one on the beach on a cold autumn morning. As Coulson’s enigmatically illustrative brand has evolved over the years, it’s been most noticeable in the mood and ambience found in the light, which itself lives and thrives within the painting and that’s ultimately transcended every other element to become the pallbearer.

Coulson himself describes this graphic realisation best when he says; “More of the image is taken up by sky, for this gives the light, therefore the mood of the painting. The landscape is almost incidental”. Elaborating on this concept a little further, Coulson offers the following explanation; “This may be because of my locality on the edge of the Cambridgeshire Fens, a notoriously flat area that is dominated by the sky. Also, I can drive for an hour and be on the Norfolk coast, well known for its huge empty beaches where the tide goes out for miles”. In summary it’s this portrayal of momentous space which has been at the centre of Coulson’s accumulative successes, almost inviting the narrative from viewers who in turn write themselves into the painting, identifying with the solitary figure on the beach, which has essentially become the artist’s signature stroke.

In terms of inspirations aside from his father, Coulson drew on the paintings of Monet, Corot, Sisley and Seago amongst others, yet readily admits that due to not having a formal art education to speak of missed out on discovering art history and examining and scrutinising findings on specific artists or movements which may or may not have otherwise influenced him. Coulson remains certain that although he has his own clearly defined style and direction these days, in the beginning his early work tended to be just pale facsimiles of his artistically-acclaimed father’s.