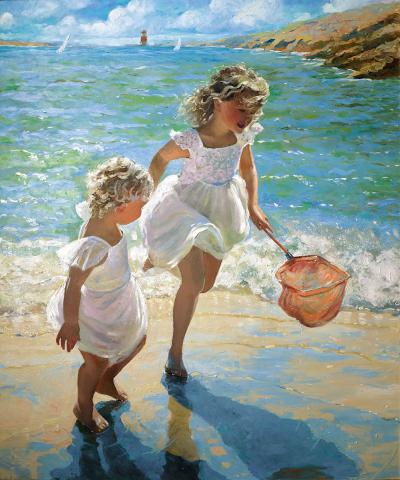 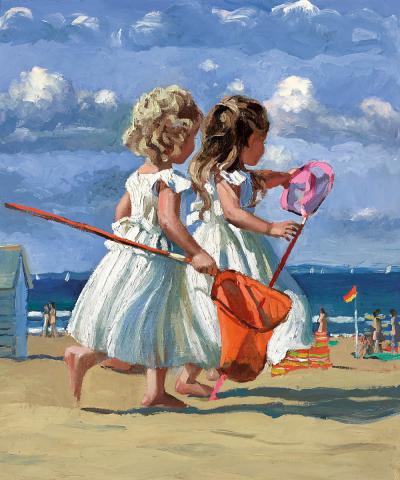 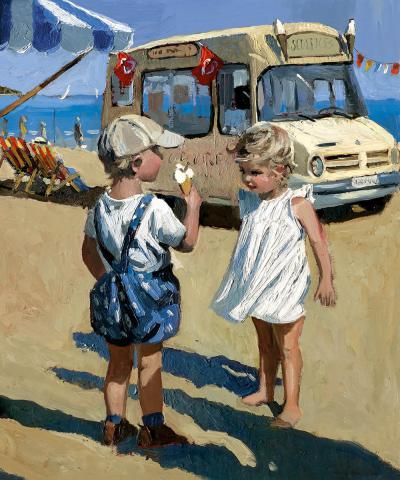 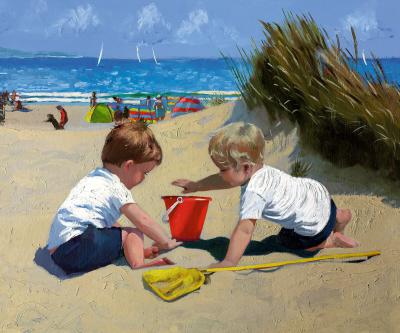 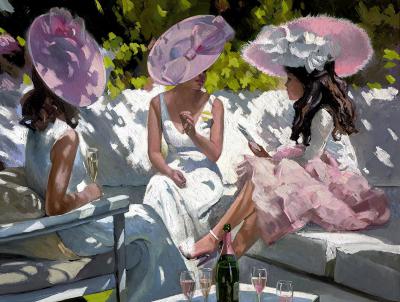 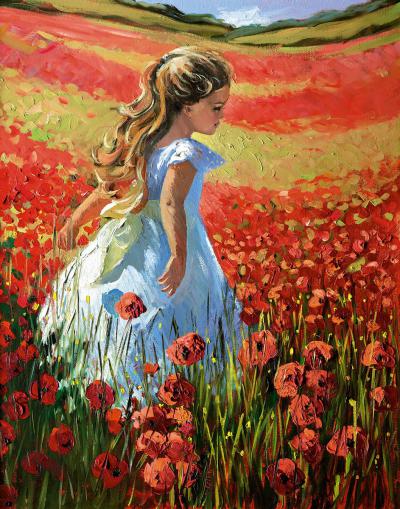 View All Art Works By Sherree Valentine Daines
Sherree Valentine-Daines is known to many art lovers and collectors (including endorsements from the members of the British Royal Family) for her portraits and figurative work focussing on stars of the stage, screen and sports fields, having built up a fairly substantial back catalogue to date. Michael Parkinson, Joanna Lumley, Laurence Llewellyn-Bowen, Martin Johnson and Jonny Wilkinson being just some of the household names who have sat for Valentine-Daines and been subject to her brushstrokes. However the now much-celebrated contemporary artist may never have actually become a professional, as her early life panned out pretty far removed from where she finds herself these days.

Valentine-Daines schooled in Leatherhead in Surrey, after being born in Effingham in 1956. Rather than attending college, the bright lights of London called and an 18-year old Valentine-Daines answered by taking up a sensible, yet somewhat conservative career as a legal secretary. Courtesy of being an intelligent young woman and quick to learn, Valentine-Daines often bought herself time on account of her initiative and efficiency, which she would then occupy by sketching. These glorified doodles would take the figurative form of work colleagues, clients and even the City’s omnipresent pigeons, as she filled her yellow legal pads with a myriad of shorthand visual compositions. It didn’t take her long to realise that she might just be entering the wrong profession and a rethink might be required.

So Valentine-Daines brought a premature end to her short-lived legal career, and at the age of 20 embarked on a course of artistic study at Epsom School of Art, where she attended for four consecutive years. The Fine Art course afforded Valentine-Daines a priceless insight into every aspect of the genre that would stand her in good stead for a career in the industry. The study and interpretation of life models was high up the curriculum and she was expected to appreciate and hone skills in form and composition during her time there, and during this period Valentine-Daines began to emerge with a distinctive style of representation. Inspired by the collective works of Renoir and Monet, Valentine-Daines showed great promise with her understanding and application of light and shading, which eventually signposted the route toward impressionism.

On graduating that summer, Valentine-Daines decamped to Cornwall where she journeyed through its picture postcard villages, harbours and coastal fringes, committing to canvas every vista that met her gaze. China blue skies, glorious countryside and golden sands were all captured, yet above all else Valentine-Daines concentrated on people. Perhaps an alternate career in sales could have beckoned, as the artist – fresh from creating an impressive portfolio chronicling her most recent travels – audaciously approached a local private school, propositioning the head teacher to allow her to showcase said compositions then and there. This enterprising endeavour reaped immediate rewards for Valentine-Daines as she sold painting, as well as securing a number of commissions to boot. This allowed her to pay back the monies she’d begged and borrowed to cover the framing of the artwork, provision of light refreshments and the manufacturing of invitations that were required from the outset of her mounting her own relatively impromptu exhibition.

It came as something of a revelation to Valentine-Daines that she could indeed furnish a potential living from what she loved and to a certain extent, came naturally; and this motivated her still further to both paint and to locate new venues for future exhibitions. Small local theatres and civic establishments followed, eventually paving the way for a one-woman show at one of London’s prime cultural and contemporary venues, The Barbican. Fate also dealt a massive, positive blow at this juncture in Valentine-Daines’ burgeoning art career, as the timing of this exhibition coincided with a swelling of affluent theatre-goers turning up nearby to attend the opening night of ‘Les Miserables’; providing an inadvertently fortuitous shop window.

All the time, however, Valentine-Daines had held down a slightly more conventional day job, so as to continue to self-fund her eventual dreams, whereby she designed jewellery for Chaumet, a prestigious Parisian company. But at this point Valentine-Daines decided to bite the bullet so to speak, and take a punt on going full-time with her painting in the fervent belief that she could make a success of it. Selecting prime London locations, frequented by those with both a sense of style and the money to back it up, Valentine-Daines spent her days and weeks flitting around the South Bank area, mixing with traders and buyers in busy street markets found south of the River Thames, whilst also tracking back to the more obvious Covent Garden. Here and there she’d draw, sketch and paint, catching people’s likenesses in a mixture of environs and surrounds. In the artist’s own words; “When I was starting out as an artist I painted anywhere and everywhere. With my easel, palette and paint-spattered clothes I suppose I cut a slightly unorthodox figure but this worked to my advantage as I met a lot of interesting people. Amazing how often individuals come up and talk to you when they think you may be a little eccentric…”

It wasn’t long before she gained the exposure, and thereafter, the accolades that her figurative and portrait talents commanded, being duly noted by leading lights within the cultural world into who’s path she’d often cross; and ostensibly laying the foundations for Valentine-Daines’ future successes. There followed Valentine-Daines as a recipient of the Laing Landscape and Seascape Competition and the Young Artist of the Year Award, as presented by the Royal Portrait Society no less. As one of the UK’s most formidable contemporary artists Valentine-Daines has an impressive track record of exhibitions at such venues as the Tate Gallery, the Barbican, the New English Art Club and the Lord’s Museum, whilst her recent projects have included the publication of ‘First Impressions’, a stunning hardback book celebrating her life and career.