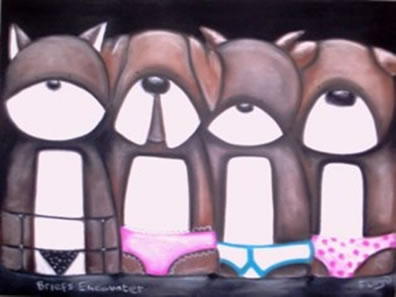 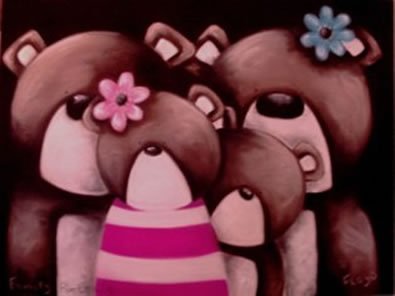 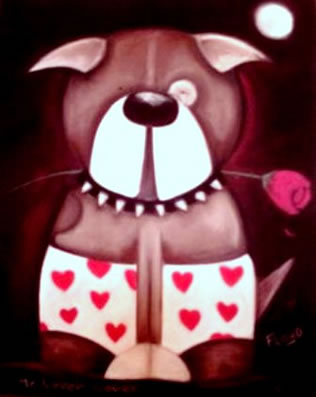 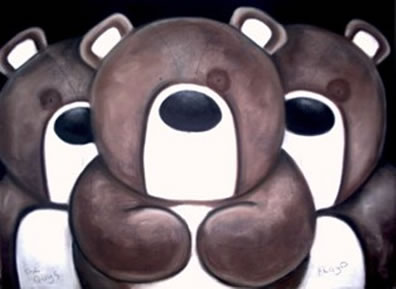 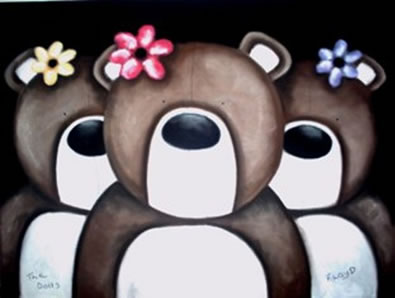 View All Art Works By Garry Floyd
Rather like Peter Smith has his â€˜Impossimalsâ€™, equally exciting contemporary figurative artist, Garry Floyd has his â€˜Luvimalsâ€™; a collection of pseudo-animated cuddlies who â€“ predominantly cuter-than-cute-has-a-right-to-be teddy bears â€“ lighten up the darkest recesses of your house. Or wherever else you choose to display one of Floydâ€™s emotionally uplifting paintings. Habitually found lounginâ€™ and aâ€™ lovinâ€™ in various backdrops, Floydâ€™s bear, dog, cat and human-esque soft-play creations have a habit of being painted on sofas, in baths, in classic cars, in the wild and in one particular case; in (just) their pants. But you see humour and wit underpin the nucleus of Floydâ€™s hallmark compositions, proffering a warm, feel-good pictorial ambience, which has proved to be a winning illustrative formula.

Born and bred in Minehead in Somerset, Floydâ€™s career journey has taken him far and wide of the West Country, from London to New York to Hong Kong, in terms of gallery exposure and art publishing deals heâ€™s signed with leading houses that are representing him these days. Indeed, with regard to the latter, Floyd recently put pen to paper on a deal with Art Links Asia, Asiaâ€™s largest art publishing company no less, whoâ€™ll obviously expose his work to newer markets again. As part of this collaboration, Floyd has already got his first solo exhibition in the Far East behind him. But we need to go back a bit further in time, to establish the how, why, when and where in relation to the series of events which unfolded and ultimately paved the way for the successes Floydâ€™s witnessing today.

As a student, Floyd divided his creative time between both the visual arts and the performing branch, although more musical we hasten to add, rather than amateur board-treading or such like. Floyd attended The West Somerset Community College and describes his years spent in its art department as essentially the best of his school days bar none. The environment and encouragement shown by his art teachers provided the perfect launch pad for Floyd, as he opted to study for a degree on Art and Design at the Somerset College of Art thereafter.

However as we hinted above, Floydâ€™s interests and creative loyalties were torn between making art and making music throughout his formative years, and it came to pass that music would win the first battle of wills. Floyd was a drummer in The Jackdaws, a Mancunian band that experienced measured success on the contemporary scene as a four-piece indie/rock outfit, and regularly toured the UKâ€™s pubs and clubs as well as some of Europeâ€™s stadiums. Basically, his early career was spent fulfilling his long-held ambition of being a musical artist rather than an artist, artist, but soon enough that was all set to change, when in 2006 â€“ shortly after returning from touring â€“ Floyd discovered heâ€™d got an altogether new and different set of groupies; this time clamouring for his art.

During his student days, Floyd had shown a preference for originating large scale abstract work, applied with acrylic paints, however when re-familiarising himself with his old paints and palettes, these tried and tested materials and mediums failed to inspire him like they once did. So instead Floyd started experimenting with pastels, citing their sense of immediacy and contrasts, and moreover the sense of control he gained by using his hands more fully; intricately and robustly as demanded by the individual piece. In no space of time whatsoever, Floyd was gaining new-found confidence and an unseen feeling of expression though his visual work, and as he increased his pictorial output, so interest in his own brand of art spread.

Floyd quickly gained a reputation locally and regionally for his personable, touchy-feely art, the sort which never fails to put a smile on peopleâ€™s faces, and within 12 months of starting to paint again, properly and purposefully, Floyd admitted that he was struggling to keep up with the growing demand for his original pieces. So much so that he arrived at the conclusion he needed to manifest short-run limited edition and open edition canvases as well, to support his creative mainstay and appease his burgeoning fan-base. A fan-base craving his unique art as opposed to his drum licks.