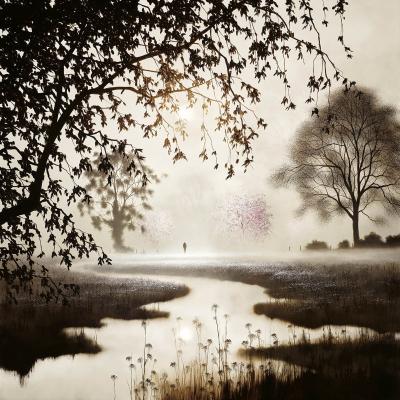 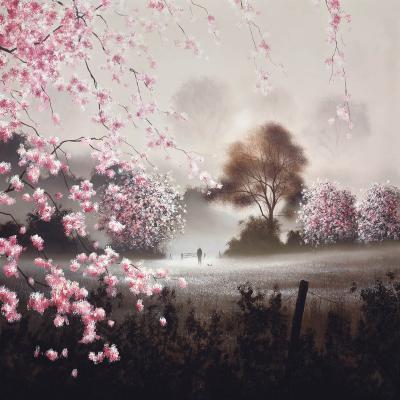 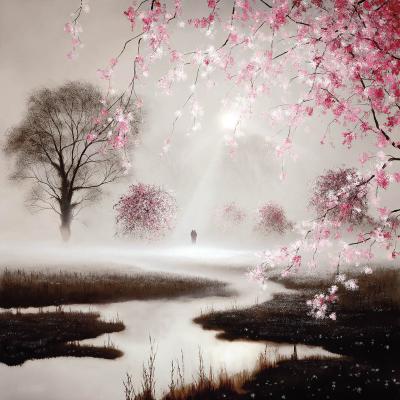 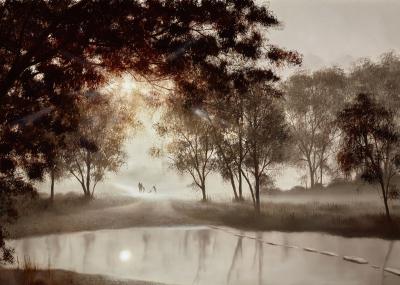 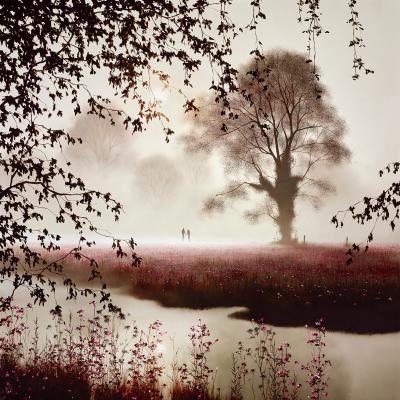 View All Art Works By John Waterhouse
Widely acknowledged as one of the UK’s foremost and most versatile oil painters, contemporary landscape and figurative artist, John Waterhouse’s critically acclaimed compositions cover a multitude of highly illustrative bases. From mist-shrouded mountains and woodland vistas to stunningly pictured, sensually-realised female figures, Waterhouse has a unique and pictorially endearing way in which he routinely portrays each and every subject matter. During the past decade his reputation for manifesting work of incredible graphic substance, yet presented with great swathes of considered style has soared, and ensured he’s built up a huge fan base amongst contemporary art lovers and seasoned collectors alike.

Despite showing great artistic promise at school and bagging not only a grade A Art O-level but the accolade of being best art student in his school year, Waterhouse didn’t choose to further his formal creative education, and instead sought to enter the jobs market by taking up a warehousing role. He didn’t let go of his art totally however, and in his spare time would paint, teaching himself technique, methodology and application. All of which came in useful when he elected to reduce his hours as a storekeeper to dedicate more time to his increasing art skills and potential, which also opened the door to him passing on the knowledge he’d afforded himself to young offenders at an institution local to him in Staffordshire.

Here Waterhouse gained a lot from sharing his now obvious talents with those who needed a sense of direction in their lives, and speaks candidly about finding this period of his professional life very rewarding. Indeed, Waterhouse discovered that working with these young people he would encounter a wealth of talent that would normally have gone unrecognised, so he tasked himself with attempting to encourage his charges to see this as a new adventure, and with it foster a belief that art can change lives.

This period proved equally inspirational to Waterhouse, the results of which became evident in the body of work he was producing around the time, as employed only two-day weeks in this capacity gave him plenty of time to further his own artistic odyssey. As his own distinct and personal style evolved Waterhouse honed his skills and it wasn’t long that he was gaining the attentions of art lovers in the locality who themselves made orderly queues with commission-based requests. In due course – and on account of the staggering response that his compositional work was producing – Waterhouse quit his part-time role and launched himself in the guise as a full-time, professional contemporary artist.

With local and regional art galleries also keen to exhibit his body of work, it wasn’t long before Waterhouse appeared on Washington Green’s radar, recognised as one of the country’s leading fine art publishers who can open doors for potential artists looking to make a name for themselves in the broader marketplace. Suffice to say they were impressed with what they saw and have since represented Waterhouse in terms of promoting his work to galleries far and wide and being instrumental in fine quality, limited edition print reproductions of the artist’s signature original pieces.

Waterhouse’s creative process is one that some might describe as painstaking and laborious, but nevertheless the results speak for themselves, and like most of Waterhouse’s life to date, he’s been meticulous and measured in his approach to situations and opportunities that present themselves to him and as a consequent means of furthering himself on a bigger stage. Explaining in his own words, Waterhouse says; “Before I start any painting I have to feel confident about the composition and balance of the picture, sometimes spending days or even a week producing sketches and collecting reference material in the form of photographs as well as using my memory”. He goes on to add; “This may even involve producing a very detailed scale drawing and watercolour sketches. I then proceed with the painting, working mainly in oil. I can usually cover the whole canvas or panel in one or two days, showing the basic composition. The painting is then left to dry”.

Thereafter Waterhouse crafts his oil paint accordingly to engender this all-consuming sense of atmosphere and graphical ambience which serves as his illustrative hallmark, which when working on what he considers to be very fine, elaborate compositions may involve weeks of work and the administering of countless different brushes to achieve the desired and envisaged end result. Once this process nears completion Waterhouse will place the canvas out of sight and mind, only to revisit it a couple of weeks later to look at it with fresh eyes. Detachment is a key part for Waterhouse so that he can ultimately address what he perceives to be the finished visual article from a completely new viewer’s favoured perspective. This amounts to Waterhouse’s final phase, should there be no additional amendments to be sanctioned.

Admittedly, as Waterhouse is keen to stress, with a landscape in particular there is a lot of information already in evidence, yet there’s always an unseen element that could embellish it and make it that something a little more unique and special. Be it a cloud formation, a distant figure, or perhaps the way the light is falling. Waterhouse feels that his landscapes are not so much an original idea, but an ability to balance and compose what is already there. By taking plenty of time to study the view that he’s set to paint, helps him decide the areas that require toning down and the areas that need to be made more vivid, if any, in order to emphasise its true character.