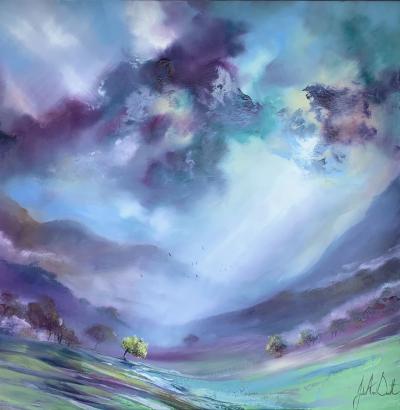 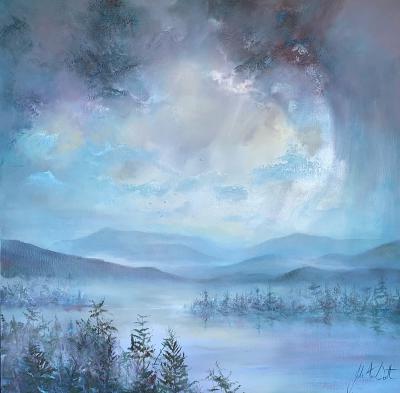 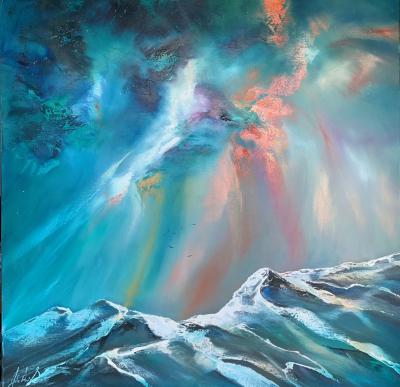 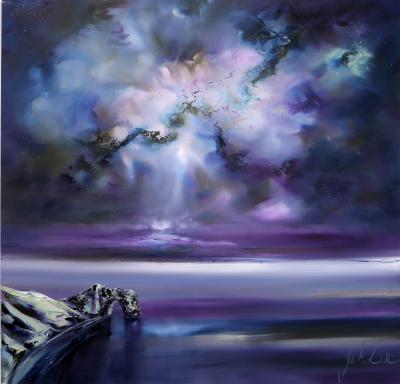 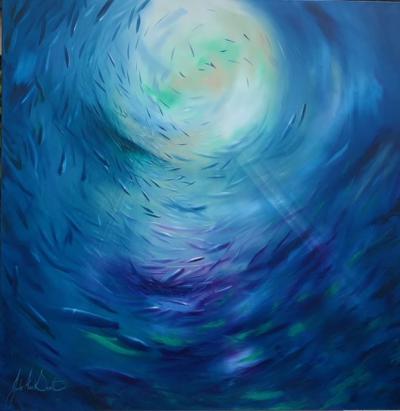 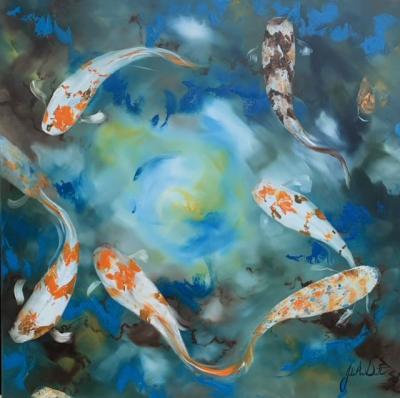 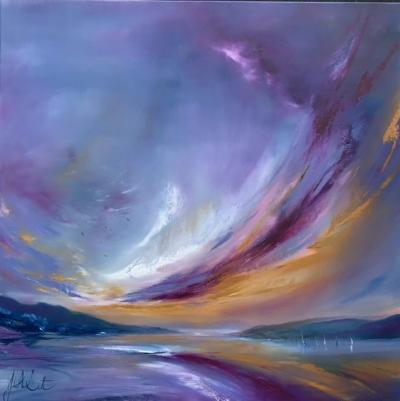 View All Art Works By Julie Ann Scott
20000 Leagues under the Sea, The Abyss, Thunderball, Jaws. All at some part filmed underwater, looking up towards the surface. Just like celebrated contemporary fine wildlife and landscape artist, Julie Ann Scott pioneers, although in her case presenting her findings on canvas rather than celluloid. So, therefore avoiding scary 1970s soundtracks for a quiet, pictorially-composed start. Scott’s enigmatic and spiritually uplifting oil paintings are monumentally illustrative and nine times out of ten focuses on intense, dramatically coloured underwater scenes in which, typically, shoal after shoal of fish are depicted swirling in their characteristic formations, an all star cast visually supported by the inclusion of vibrant shafts of natural light reflecting down from the water’s surface.

This profound, almost divine introduction of light beams act as the unofficial unifying factor representative in all of Scott’s signature art works. The misty, undefined darkness being pierced and fractured by the sun’s insistent enterprise on the above surface. Scott’s interaction and integral light play serves to inspire the artist from the outset, confirming such on many an occasion, implying that its glorious intervention is welcomed and encouraged from both an aesthetic and spiritual perspective and provides a crucial, omnipresent graphical point of reference.

Fish (and aquatics in general) are not the sole provenance of Scott’s work mind, as she’s also more than dabbled with other, equally gregariously-pitched subject matters, including landscapes populated by trees, fields and flowers, whist also interpreting animals and abstracts in her own, personal artistic fashion. Then, having some of the UK’s most dramatic and gorgeously heightened vistas and horizons on her doorstep means that Scott is exposed to inspiration on a daily basis, and would literally be classed as a travesty if someone of her undoubted creative talents didn’t visually record this. Scott’s studio is geographically located in Kendal in Cumbria, which is universally recognized as being the gateway to the Lake District National Park, which as anyone who’s ever been there acknowledges is, simply put, breathtaking in the extreme when it comes to immediate and distant panoramas.

Scott settled in Kendal back in 2000, after return to England after her extensive globe-trotting, which also took in stints as a catwalk model in Israel and being an actress in a California-based touring drama group. And it was on reacquainting herself with her native shores that she reintroduced herself to painting. Before we forget, Scott bagged a Grade A in Advanced Level Art, which she studied back in the day at Lytham St Annes College, situated up on the Blackpool and Fylde coast in England’s North West.

Discovering a renewed vigour and excitement for her oil paints – picking up from where she left off during her student days and the period thereafter before she got the travel bug – Scott’s brand of art work proved very successful with a broad audience of contemporary art fans and seasoned collectors alike, and it wasn’t long before Scott’s work was generating interest near and far, via the shop windows of a cross section of local and regional art galleries, whilst also attending a series of fairs to promote her artistic wares. Alongside of the likes of galleries relatively close to home in Cumbria, Scott’s individual works and collections have been showcased at the Grange Gallery in Dublin, the NEC in Birmingham and selected venues in Oxfordshire, Devon and London itself in recent years; every airing receiving critical acclaim and ensuring that her reputation as a fine artist continues to increase.