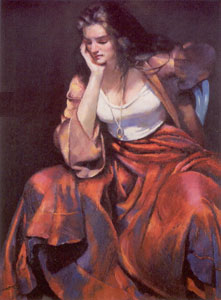 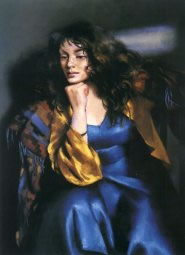 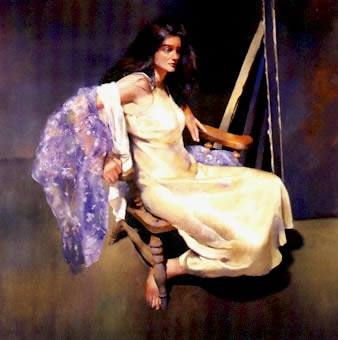 View All Art Works By Robert Lenkiewicz
Amid a contemporary art world populated by many who are observed to be ‘characters’ and in a fair few cases, ‘somewhat eccentric’, and measured by the very yardstick that habitually refers to them as creative, you’d have to go a long way to find someone who might be considered, unofficially at least, THE most free spirited and unconventional. But the late, great Robert Lenkiewicz could well have been crowned the leader of the pack during his heyday, where he made a habit of bucking trends and challenging widely held beliefs. From flinging open his studio doors to London’s waifs and strays to faking his own death for the sake of his art in the early 1980s, Lenkiewicz was nothing if not controversial. Routinely questioning society’s stance towards historically taboo subjects like mental health, suicide and sexual behaviour amongst others, Lenkiewicz wasn’t frightened of upsetting the establishment; not that he set out to do so as such.
Arguably one of South West England’s most celebrated artists of his figurative and portraiture genre, Lenkiewicz was more often than not overlooked and roundly ignored by many of the movers and shakers of the high art circle on account of his various society stances, yet irrespective of this found himself enduringly popular with the general public. According to various sources Lenkiewicz was responsible for producing in excess of some 10,000 works – typically manifest on a large scale – during his lifetime, with his many themed projects focussing their illustrative attentions on this almost hidden community spoken about in hushed tones; be they centred around vagrancy, mental handicaps or difficult social issues regarding suicide and death.
Born Robert Oscar Lenkiewicz in London in 1941, he was the son of refugees who ran a Jewish hotel in the city, and whose elderly residents were said to include a number of holocaust survivors. We have it on good authority that Lenkiewicz was first inspired to paint on witnessing Charles Laughton’s performance in Alexander Korda's biographical film, Rembrandt, and at 16 years of age he won a coveted place at the prestigious and annually over-subscribed centre of creative excellence located in London; Central Saint Martins College of Art and Design. After completing his course here, Lenkiewicz went on to attend that other envied bastion of all things British and artisan, the Royal Academy. However despite being exposed to all manner of contemporary art disciplines and emerging movements and fashions, Lenkiewicz held little interest in modern art and instead turned his attentions to his favourite paintings which were more likely to be seen hanging in the National Gallery.
Once he’d completed his art education, Lenkiewicz decided that he wished to paint on a full-time basis, and embarked on his professional career without further ado. Although keeping a low profile never really happened for Lenkiewicz, as inspired by the example set by like-minded man of the people, Albert Schweitzer, Lenkiewicz opened up his studio space to anyone in dire need of a roof over their head. And the local down and outs, addicts, criminals and the mentally ill soon began accepting Lenkiewicz’s cordial invites. But this arrangement was mutually convenient and agreeable, as whilst Lenkiewicz provided shelter and respite from an unforgiving outside world, his congregation in turn became the budding figurative artist’s steady stream of muses. Having said that, not everyone welcomed Lenkiewicz’s new friends and associates into the immediate neighbourhood with open arms, and before long Lenkiewicz came to the conclusion that his arrangement was more trouble than it was worth, and left London.

So in 1964 Lenkiewicz relocated to the South West tip of England, firstly putting down roots in a remote cottage in rural Cornwall, before 12 months later settling in Plymouth. By this stage Lenkiewicz had his own young family to support, which he did by balancing his art with teaching, prior to being offered studio space on the Barbican by local artist John Nash. Inevitably, and on account of his good citizenship and social ideals, it wasn’t long before Lenkiewicz was willingly gaining the attentions of the local community’s deprived, ostracised and indeed, homeless, as his new studio as well as his home once again became a magnet for vagrants and street alcoholics, who then sat for paintings in exchange for Lenkiewicz’s kindness and hospitality. As word got out, numbers increased dramatically, so much so that Lenkiewicz was left with no alternative than to acquire some derelict warehouses in Plymouth in which to accommodate what, and to paraphrase what critics, readily referred to as, ‘dossers’. In 1973 Lenkiewicz chose to utilize one of these warehouses as a studio for himself, and instantly assumed the architectural role of exhibition space for his brand new ‘Vagrancy Project’.
The Vagrancy Project consisted of several dozen paintings of vagrants and a large book of notes written by the sitters themselves, as well as those charged with their care. It was Lenkiewicz hope that the exhibition - and the down and outs' own stories - would illuminate the plight of these 'invisible people' and galvanise the community into humane action on their behalf. In terms of the public’s awareness, or for that matter, perception of Lenkiewicz as both a man and a contemporary figurative artist, that was first brought to the fore and acknowledged to any degree in the 1970s when the media drew attention to his giant mural of a man on Plymouth’s Barbican around this time. The next time Lenkiewicz courted the attention of the public (and a deal of controversy) was when, in 1981, he faked his own premature demise as part of his ‘preparation’ for his impending painting project which concentrated on the central illustrative theme of death. Speaking about this furore at the time, Lenkiewicz went on record as saying; “I could not know what it was like to be dead”, adding; “but I could discover what it was like to be thought dead”. An act which naturally polarised opinion on an artist who was gaining a reputation for flouting convention.
Eventually Lenkiewicz’s work, rather than his actions began to make the headlines, and in the aftermath of his debut exhibition, staged in collaboration with an established art dealer in the 1990s, he enjoyed a period of commercial success and even a smattering of recognition by the establishment. Lenkiewicz went on to be the subject of a major retrospective in 1997 at Plymouth’s City Museum and Art Gallery, attended by some 42,000 visitors.
In 2002 Lenkiewicz died of a heart attack at the age of 60, and even though he’d compiled a back catalogue of 10,000 compositions before his death (most of which were rated by the British Museum as of ‘national importance’), Lenkiewicz died almost penniless it would seem at the time. He owed in the region of £2 million to various creditors and it was believed that he had only £12 in his possession. Having never opened a bank account, Lenkiewicz had also never paid tax or kept any records of sales of his works, which was the root cause of these issues surfacing after his demise. That said, since Lenkiewicz’s death, examples of some of his signature paintings have fetched huge prices in London’s auction rooms, and the popularity of his work was put into fiscal perspective in 2o008 when an auction of his personal collection of his own works (and library; more of which later) raised £2.1million. A year on, and in 2009 Lenkiewicz’s estate was finally valued at £6.5 million. As well as paintings the estate included a £1 million book collection. In his obituary of Lenkiewicz, art critic David Lee observed; “Lenkiewicz’s greatest gift was to show us that an artist could be genuinely concerned about social and domestic issues and attempt the difficult task of expressing this conscience through the deeply unfashionable medium of figurative painting. In that sense, he was one of few serious painters of contemporary history”.
The father of 11 children, many of Lenkiewicz’s offspring have themselves gone on to become artists in their own right, as have a n umber of his students from his teaching days, yet few people outside of his close family would have been privy to the two remaining – and one very outstanding – aspects of his later life which again serve to tell us much about Lenkiewicz. Firstly there was his ‘Riddle Mural’; which in effect was is last unfinished illustrative work, a seismically described piece on which apparently he’d laboured behind the scenes on and off for the best part of three decades leading up to his death. The Riddle Mural in the Round Room at Port Eliot house, home of the Earl of St. Germans, was left incomplete, with half of the mural found in the 40-foot-diameter room depicting typical Lenkiewicz scenes of death, destruction, insanity, unrequited love, and the apocalyptic end of the world. The other half is mooted to reflect love and affection, friendships, harmony, proportion and consensus. Hidden in the work are various references to family skeletons, art history and cabalistic mysteries, hence the name – the Riddle Mural.
And secondly there was Lenkiewicz personal library, which was 40 years in the making and housed some 25,000 volumes devoted to art, the occult sciences, demonolatry, magic, philosophy (especially metaphysics), alchemy, death, psychology and sexuality; essentially most of the preoccupations which routinely surfaced in some of his paintings. Lenkiewicz’s collection of books on magic and witchcraft was one of the finest discovered in private hands and was largely sold at Sotheby's in 2003.